Belgium spoiled Mark McGivern’s big night at the Edinburgh University Pleasance Sports Complex but the former City of Edinburgh volleyball player can console himself in the knowledge there is an opportunity for instant revenge. 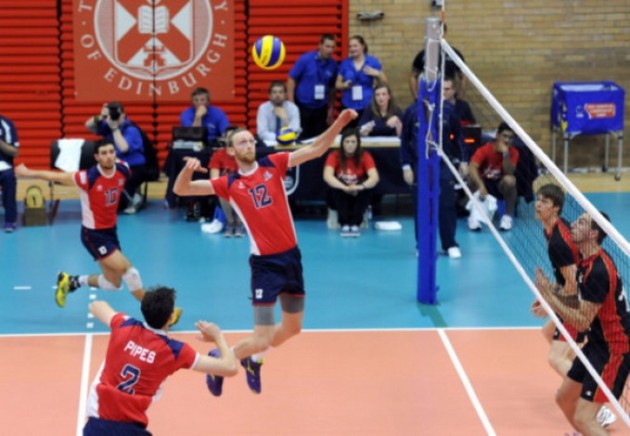 But the home team struggled to find their consistency against a Belgian side that seldom let their standards drop and Great Britain made no fewer than 22 service errors. They will look to improve when the teams meet again tomorrow.

“The result wasn’t good but to come back to Scotland to win my 100th cap in front of friends and family is a little bit special,” McGivern said.

“This is the type of match we need at this stage and I thought we held our own for the most part and kept it tight and, in my opinion, we should be beating a team like this.

Our serve let us down a bit but we’re working on going for it harder and harder so it comes more often.
But the thing with a three-match series is there is always the next game. We can go back and look how we played and what they did and try and implement it on Thursday.

We’re coming off a hard period of training. We’ve had two weeks without a match so we’ve been working hard in training. At times you can see it on court but still have 45 days to go before the Olympics and we just need to get more consistent.”

McGivern served the first ball but Belgium won the first point as it became evident even early in the first set that the visitors would not be giving up any cheap points.

They traded point for point and in power hitter Bram Van Den Dries had a potent weapon which the hosts toiled to subdue.

Great Britain led 16-13 in the first set but could not put significant daylight between themselves and their opponents and Belgium ground out the points to take the first set.

Belgium won the next four points under Pieter Coolman’s serving and GB coach Brokking was forced into a time-out at 17-19. They kept up the pressure with Sam Deroo bringing up set point with a crosscourt smash and a mistake at the net from Nathan French gave them the set 25-19.

Great Britain came back strongly in the second set and did not loosen their grip after Belgium clawed back to 14-14. The explosive Dami Bakare, set to light up the Olympics, played an increasingly influential role with his hitting and blocking as Great Britain levelled by taking the set 25-22.

Belgium’s response was impressive and, after the home team led early in the third, they came back to establish a commanding 16-10 lead.

Great Britain brought on the experienced Jason Haldane in an attempt to turn the tide but Belgium remained resilient in the block and potent in attack.

Two service aces deep in the set by Van Den Dries took them to set point and the impressive Simon Van De Voorde finished it off.

GB fought back at the start of the fourth set but again Belgium came back. With the home side leading 14-13, they ran up five unanswered points under some tough serving from Van Den Dries.

The hosts could not close the gap and Belgium clinched victory on their first match point with Van De Voorde blocking Pete Bakare.

“We were not consistent and we lacked a bit of concentration on serve reception and we weren’t positive enough on service. Belgium kept their level consistently high and punished us,” admitted GB coach Harry Brokking.

“There are a lot of positives to see and we need to find our consistency, mostly in serving, and keep up the sharpness and concentration.”