The cards are on the table and everything is ready for the ultimate showdown that will determine the participants for the Champions League Final Four in Berlin at the end of the month. 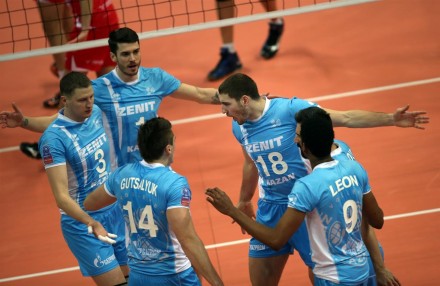 Six teams remained in the race to join host Berlin Recycling Volleys for the most awaited volleyball weekend of the year!

Every pair will be the story for itself in the Playoff 6 and every match will be a delight to the fans in Novosibirsk, Kazan and Perugia where first legs are going to be held on Wednesday, March 4. Return games are scheduled in one week.

Russia and Poland, probably two out of three countries with the strongest domestic competition, are represented with two teams each.

Lokomotiv Novosibirsk and Asseco Resovia Rzeszów will open the programme of the Playoffs 6 with the hosts determined to extend their winning streak, having dropped only one set so far in four matches they have contested at home since the beginning of the season.

Most likely the greatest favorites to lift the trophy in Berlin, Zenit Kazan, are the only team that did not lose a set in their six matches in the group phase before they conceded two in the Playoff 12 home fixture vs. Copra Piacenza.

However, it will find a hard nut to crack as they will be playing against Turkey’s Halkbank Ankara.

Juantorena & Co. as last year’s vice champions are in full swing after edging past another Russian giants, 2014 winners Belogorie Belgorod, in the previous round.

The programme of the Playoffs 6 is going to be completed by another superb clash, this time starring teams from Italy and Poland.

The rookies of Sir Safety Perugia will try to add another chapter to their success story in their first appearance in Europe’s elite competition. They will have to overpower Polish champions, PGE Skra Bełchatów.

KOR M: Fun time and win for Đurić and Kepco