WoV DREAM TEAM: Leon, Conte, N’Gapeth…? This is why they are on the list

If you are still having troubles to decide which receiver should be in your WoV Dream Team, perhaps this text might help you in your choice. 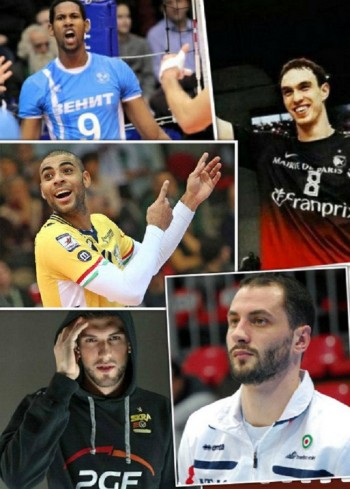 The current leader by your votes is Wilfredo Leon, a young Cuban star who is having a tremendous season. After two years of suspension, due to dispute with the Cuban Volleyball Federation, Leon has returned to volleyball. And he has returned in style. He signed a contract with Zenit, and that deal turned out to be a jackpot for both sides. The Kazan powerhouse won the CEV Champions League, while Leon was named the MVP of the tournament. He also helped his team to win the Russian Cup, while Zenit has qualified for the Russian Championship finals… A dream season for Leon and his team.

Facundo Conte is the second placed receiver on our WoV Dream Team list at this moment. The Argentine “bomber” was brilliant throughout the whole season, however his PGE Skra Belchatow picked up some bad form before the crucial games and therefore failed to reach the CEV Champions League finals and the Polish Championship finals. Conte will definitely stay remembered by his trademark action with Nicolas Uriarte which has marked this season.

The next on the list is Marko Ivović, player of Asseco Resovia. Ivović arrived in Poland last summer with a title of the MVP of the French Championship, however he had a bit of a slow start. He was not part of the starting lineup in the first quarter of the season, but he remained persistent and it has paid off. The Serbian player has become irreplaceable in the roster of Resovia, and he helped his team to win the silver medal in the CEV Champions League, as well to qualify for the Polish Championship finals. Also, his excellent plays turned attention of none other than Belogorie Belgorod!

The fourth place currently holds Earvin N’Gapeth, who was the absolute hit on all Social Networks in the previous season. The Frenchman is enjoying the game, and all volleyball fans are enjoying to watch his fantastic moves on the court. N”Gapeth got famous by his 180 spin spike, but also by the extraordinary setting feint which was all over internet. Also, he helped his Modena to win the second spot in the Serie A regular season… The title would be a crown of his 2014/15 journey.

Finally, you can also vote for Matey Kaziyski, the most experienced player on this list. Matey has made quite a decision last summer when he turned down many rich offers just to return to Trentino and help the club relive the glory days… The famous Bulgarian has already brought back the Italian Cup trophy to the club’s cupboard, while the next goals are CEV Cup and Serie A.

You can still leave your vote in our WoV Poll and choose the best male and female players and Dream Team!

CAN M: Head coaches are ready for...