WL M: Italy have their work cut out in thrilling five-set win over Korea 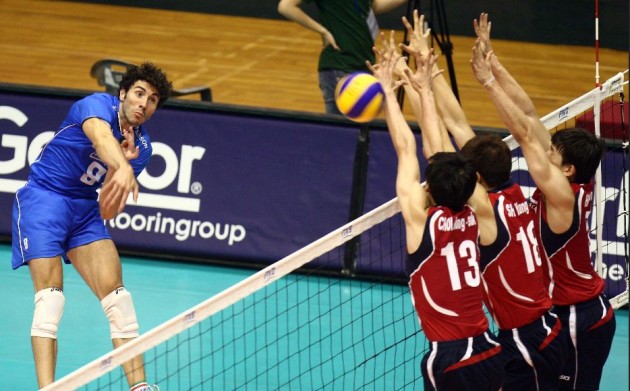 Italy now have 11 points and closed the gap on Pool C leaders USA and France, who both have 14 points and would face each other in the later game. Korea raised their points total to six.

Top scorer in the match was Giulio Sabbi with 24 points. He was one of four Italians to reach double figures. Jiri Kovar had 18, while Giorgio De Togni and Gabriele Maruotti had 16 apiece. Korea were led by Park Chul-Woo with 21 points.

Italy edged the Koreans in serving points 6-4 and blocking points 16-14. Surprisingly, the Koreans only committed 21 errors to Italy’s 30 in the match, which lasted an hour and 58 minutes.

Italy had the advantage in height and power, and in the early stages used strong serving and good blocking to take control, with good contributions from Sabbi and Maruotti. Park tried his best for Korea, but the home team suffered from poor reception and poor blocking and were no match for the Italians in the first set.

Korea struggled again early in the second set, but when Kim Jeong-Hwan joined the fray, he helped turn things around for Korea. But it wasn’t enough, as Kovar and De Togni kept the pressure on and Italy were able to take the second set as well.

Korea changed setters and became more organized in the third set. Ha Kyong-Min produced three great blocks to frustrate the Italians and the flow of the match started to change in Korea’s favour, allowing them to clinch the third set.

Going into the fourth set, Korea had the momentum, and their tactics and defence allowed them to stay strong. Jeon Kwang-In and Park sparked Korea’s attack and things stayed close before a block by Park clinched the set for Korea and levelled the match at 2-2.

Korea changed setters again in the fifth set and their organisational skills kept them level with the Italians to 13-13, but then the Italians blocked their way to victory after nearly two hours of enthralling play.