World No. 1 and reigning champions USA recovered from a poor start to power past a spirited Argentina in straight sets (25-23 25-17 25-12) on Saturday in their second encounter in the FIVB World Grand Prix Pool J at the Keelawes 1 Gymnasium. 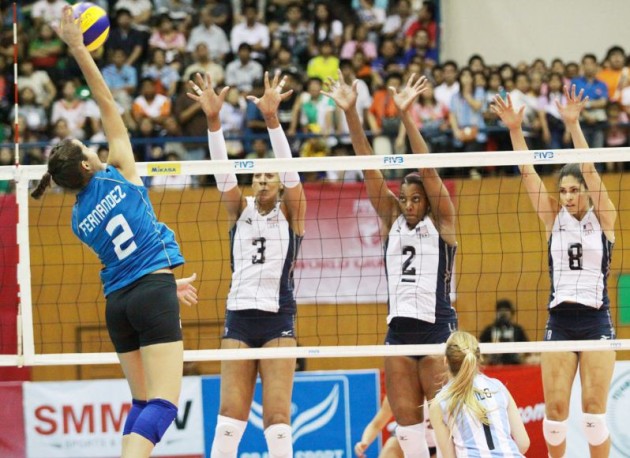 The USA utilise a triple block for a spike from Argentina.

Against winless Argentina, the USA replaced their best players with those who were rested in their previous match against Serbia. They included captain Danielle Scott-Arruda, Courtney Thompson, Cynthia Barboza and Tayyiba Haneef-Park, while Argentina fielded a similar line-up to the one that lost to hosts Thailand in straight sets.

Playing without any pressure, Argentina started confidently, with Paula Yamila Nizetich carrying out dazzling jump serves, and Florencia Natasha Busquets and Yael Castiglione combining well for stuff blocks. Argentina led their high-profile rivals from the beginning to 12-9. USA coach Hugh McCutcheon asked for a timeout to improve his side and he obviously did the trick as they were level at 13-13. Argentina stayed on the offensive, with hard-hitting Emilce Sosa attacking spectacularly at the net to put the world No. 18 in front at 19-18. Fast spikes from Heather Bown and Haneef-Park sparked USA’s comeback and the Americans caught up with Argentina at 20-20. Hodge, who topped the scorers in USA’s previous match against Serbia, uncorked dazzling mid-court spikes to help her team lead 24-20. Gutsy Argentina saved three set points and closed to within a point at 23-24 when Cynthia Barboza fired a deadly spike from the post to clinch the set.

The Argentinians tried to make amends for the loss, but USA took command for an initial 5-2 lead in the second set and stretched it to 11-7 and then 14-7. Scott-Arruda, Haneef-Park and Hodge established an impenetrable defence, making it hard for their unfancied opponents to score. It became more one-sided as the USA left Argentina far behind, moving into a 20-11 lead and then 24-14. However, the Argentineans did not give up easily. They hit back gallantly to save three setpoints before Nancy Metcalf, who was sent in in the last minute of the second set, spiked powerfully to clinch the set for the USA.

The third set became completely lop-sided. USA had a few problems coping with Argentina’s tactics and Hodge’s powerful jump serves put USA 5-1 ahead. From then on, USA never looked back. Hodge and Bown performed superbly to help widen the gap to 18-6 and 24-12. A spike from Florencia Carlotto went wide and the USA ended Argentina’s challenge.

WL M: Italy have their work cut out in thrilling five-set win over Korea