Spain beat Slovakia in the last match of preliminary action in the 2012 CEV Volleyball European League – Men thereby taking its revenge for last year’s final that was also played in the splendid scenario of the “Steel Arena” in Kosice but had ended in favor of the hosts. This time, with some 1’500 fans in attendance, Spain got past Slovakia with the score of 3:1 (25-19, 25-23, 21-25, 28-26), a result that nevertheless did not impact on the standings of the group with both teams already qualified for the final four scheduled for next weekend in Ankara. 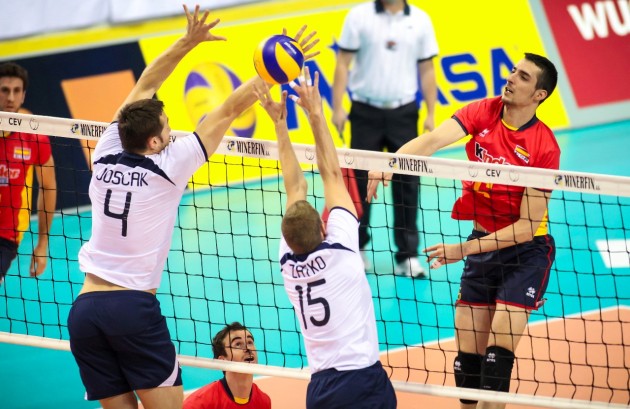 The match featuring Spain and the home heroes of Slovakia was the real highlight of the weekend in Kosice and a remake of last year’s final. As head coach Stefan Chrtiansky had decided to rest starting opposite Milan Bencz, Slovakia lined-up Miroslav Jakubov in that position but Spain started by pressuring a lot from the serving line and with great help coming from Iban Perez, the guests seized the opening set quite comfortably (25-19).

Spain stormed out to a massive 10:4 in the second set but Slovakia gradually found its way back into the game with a block by Peter Kasper that called for the 23:22 in favor of the guests in red jerseys, who eventually went for the provisional 2:0 (25-23). Slovakia claimed a small break in set 3 via a spike and a block by Milan Hrinak and team captain Frantisek Ogurcak finished that period at 25-21. Spain was up 23:18 in set four, but the audience got the opportunity to watch a thrilling end with Slovakia clawing back to 24 all before Spain cashed its fifth match ball for the 28-26 that sealed the final 3:1 on the scoreboard.
“We started slowly and Spain profited of our mistakes. We were not able to finalize our attacks and our service was very weak. Anyway, we’ll take one day off to rest and then start preparing for the final four in Ankara where we hope to claim a good result. We will travel to Turkey with the same group that played this weekend here in Kosice plus our starting setter Branislav Skladany” said Slovak head coach Stefan Chrtiansky.

“I think we played good all the way through, better than we had done in the previous matches here in Kosice. We went up in set 3 and 4 but Slovakia gradually came back and the ending of the last set was very tense and emotional. We are very happy to finish first in the group as we had many tough matches and tie-breaks. We enjoyed playing here as the arena is great and the conditions offered by the Slovak Volleyball Federation are always excellent. We’ll go back to Spain and start preparing for the final four” said Spanish mentor Fernando Munoz.

EL M: Israel finished third in the standings of Pool A

Montreux Volley Masters to be staged from...