EL M: Israel finished third in the standings of Pool A 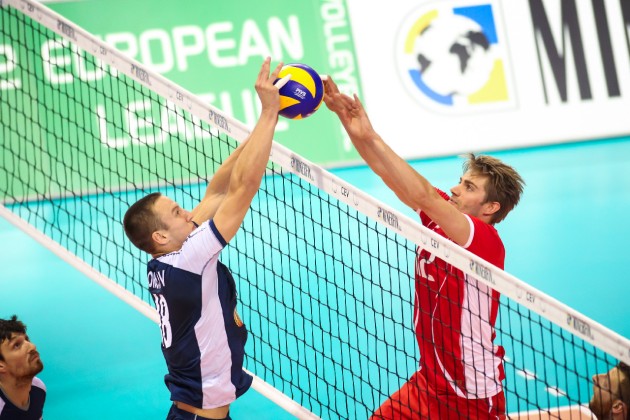 Denmark set the pace of the game in the opening set (16:15) but Israel flipped the score around with a few attacks contributed by opposite Guy Ben Gal (21:19). However, Denmark stormed back and eventually claimed that section of the game with the score of 25-23. The score stayed very tight also in set 2 with both teams successfully completing their side-outs; Denmark got up 16:14 but Israel scored the next four to lead 18:16 after an ace contributed by Ariel Katzenelson. Israel broke away up to 24:19 and after a little drama could close that set by the score of 25-23.

After a strong Israeli opening (3:0), Denmark moved up 9:6 in set 3 and enjoyed a margin of four (15:11) as Israel was struggling in reception. However, anchored by team captain Shafranovich, the Israelis fought their way back and it was the Ukrainian-born spiker that closed it out with an ace for the 27-25. A similar story followed in the fourth set where Denmark got up 8:3 and even 18:16 but after another close final rush, Israel – well supported by Itamar Stein – sealed the deal at 28-26 to claim the third position in the final standings of Pool A.

“It was a tough game because both teams were evidently tired. I am proud of my players and very happy with the outcome of this last tournament here in Kosice; it was very important for us to end up third in the group” said Israeli coach Zohar Bar Netzer.

“I think that Israel and Denmark were the real surprises of this year’s European League. Israel was able to regularly fight back after being down in the opening of all sets. We are disappointed by this loss but motivated to go back home and work hard for next year’s European Championship. This participation in the European League has been a great experience for all of us” commented Martin Olafsen, Denmark’s assistant coach.