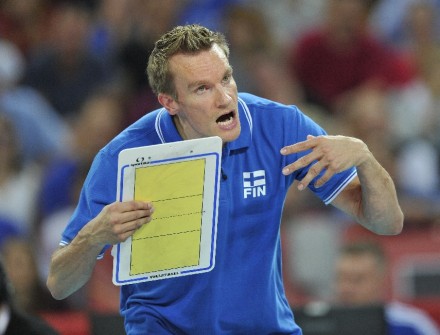 This weekend’s matches mark Finland’s eleventh participation in the FIVB Volleyball World League, with ten consecutive participations since 2006, a 45-81 win-loss ratio and a best seventh place finish in 2007.

As the Finns open their campaign this weekend, Tuomas Sammelvuo´s men will take on Belgium in Tampere. Finland and Belgium have met in the FIVB Volleyball World League four times, all last summer. Finland won three matches and lost one. Both games played in Tampere were won by Finland 3-2. All-time wins against Belgium are 26-19 to Finland and 7-2 when playing on Finnish soil.

“Belgium are a really tough team. They play a similar style to us: never giving up a ball. They play really fast attack. Many of their players have been playing in big clubs in a big role,” said head coach Tuomas Sammelvuo. Sammelvuo is now leading Finland for the third time in the World League.

”We are hoping for a good start to our campaign. Games against Iran have given us lot of good answers. We have good self-confidence to start. Just waiting to have a great audience at the Tampere Icefall to cheer us on,” added Sammelvuo.