The United States clinched its second victory at the 2012 World Grand Prix final by smashing the challenge of rising Asian side Thailand 3-1 here on Thursday. 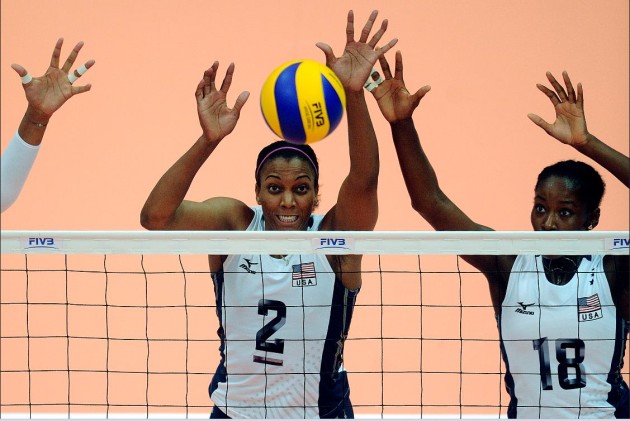 Both teams went into the game quickly and after a serving error by Nootsara Tomkom of Thailand, the United States came into the first TTO with an 8-7 lead. Cynthia Barboza popped up on the left after the timeout, helping USA keep the three-point lead to 10-7.

Thailand coach Kiattipong Radchatagriengkai had to call a timeout but still could not stop the Americans, Danielle Scott-Arruda led the US team with two kills to enlarge the gap to six points and forced Radchatagriengkai to call the second timeout in less than five minutes.

The following part of the set was much easier for the US team as they maintained firmly a six-point lead and never looked back.

The second set was more fiercely contested as Thailand boosted their attacking. The 1.80-meter Pleumjit Thinkaow, who had 11 points, moved her team two points ahead over USA at 8-6.

Trailing 16-19, Megan Hodge contributed two kills and a block to help the United States storm to a 6-2 run to lead the match again at 22-19.

Thailand then saved two set points but could not stop the high-flying spike from 2.00-meter wing-attacker Tayyiba Haneef-Park and the US team won the second set at 27-25.

In the third set, Thailand squandered an early lead at 5-3 and the Thai reinforced its defense to extend the gap to four points and came into the second TTO 16-12. Thailand dominated the set after USA became prone with unforced receiving and spiking errors. Thailand launched a 5-1 run to improve to 21-14, thanks to the devastating spikes and precise serves of its spiker Haneef-Park.

Onuma Sittirak tear open the defense put up by two Americans for a spike that gave Thailand the victor of the third set at 25-18.

The United States re-built their solid defense and went 8-5 ahead in the fourth set. Thailand managed to catch up at 13-13, but its disadvantage over the net raised USA to 16-14.

The team gave full play of its powerful attack to enlarge the gap to 23-17 before Haneef-Park earned the match point 24-18 and an error from Thailand team gave the US team final victory.