With the presence of the President of the Argentine Volleyball Federation, Juan Antonio Gutiérrez, this Tuesday, June 26 took place the official opening ceremony of the state-of-the-arts new sport facilities of the San Juan Volleyball Federation, at the launching of the U 16 Boys National Championship, that is taking place in San Juan. 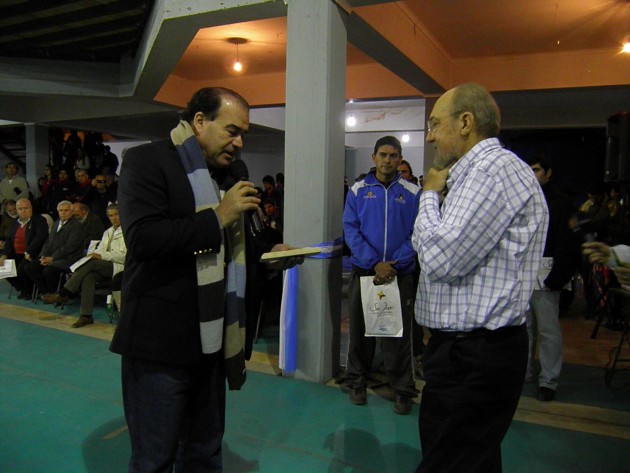 With a great officials support the emotional opening ceremony took place with the presence of local and province authorities and most FeVA Board of Administration.

The Mendoza Volleyball Federation, represented by Celia Montaruli; and the Metropolitan with Vicente Finelli, gave plaques mentioning the event.

The venue, in which the San Juan Volleyball Federation worked hard, includes a place for training and a field for matches and at the future complete complex, in charge of the San Juan former Volleyball player, Alejandro Barrionuevo, all what covers the Province Volleyball needs. Some of the U 16 Boys National Championship matches will take place in the new field.

Very excited the President of the San Juan Volleyball Federation, Bergé thanked the strong support shown at the opening by volleyball and province authorities, welcoming all to the province. “It is the result of a lot of effort and work and now our federation will have its own sport facility. I want to thank all that made this possible with their continuous and hard support“.

Gutiérrez, FeVA President, pointed out the important of this achievement obtained by the FSV: “It is a very important moment for Argentine Volleyball because San Juan is one of the most important venues of the country in our sport. FeVA Board of Administration is very proud to see this volleyball venue, that will allow training, playing and giving courses, lectures and all related to our love sport“.

Gusta Álvarez, San Juan Sport Director congratulated the San Juan volleyball authorities for all the achievements they obtained during these last years and along its history.

Of course, all the local and regional Media covered this important event that means not only the growth of San Juan Volleyball but all Argentine Volleyball.

ARG: Volleyball in the Olympic farewell of the Argentine President