ARG: Volleyball in the Olympic farewell of the Argentine President 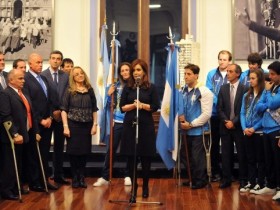 The event on Tuesday

Representing Argentine Volleyball, were part of the team that qualified for London 2012 and FeVA officials, Mr. Fabián Ramón and Mr. José María Cuadrillero.
“As usual, we are saying good bye to the athletes that will represent us with our flag very high. Go to London to show with honour that we are Argentinian. We are not fool, things are being said to discrediting us, but we do not mix different things”. The President said.

“Our rights to defend us at International Forums, but now we are going to the Olympic Games to compete in different sports, with a lot of confidence in all of your that will represent us with care and pride” expressed the President.

She added: “We increased 1,250 per cent of our Sport Budget, scholarships were increased and also the people that receive them and therefore we feel very happy. Sport needs concentration, to leave things aside to train, and therefore they make us proud and the Paraolympic athletes they have an impressive merit, they reveal a very human being important condition, courage and the feeling that to go forward even though all difficulties“.

Morresi, at the meeting added: “This is another demonstration of more engagement of the President with Argentine Sports, the same that shows the Ministry Alicia Kirchner. The words of Cristina were very clear: the athletes go to London to compete and only will defend our light blue – white colours in sport competitions, leaving other Argentine facts aside on the fight to recover the sovereignty of the Malvinas Islands“.

At the event also were the Under-Secretaries Luis Vivona, Gustavo Berta and Marcelo Chames; the Directors Osvaldo Arsenio and Marcelo Giraudo; the Chief of Staff of Advisers Secretariat, Marcelo Achile, and the President of the Argentine Water Sports of Argentina, Raúl Araya.