Only a few days are left for the final showdown in this year’s edition of the CEV Volleyball European League – Women that is coming up next week – July 5 and 6 – in the Czech spa resort of Karlovy Vary. Together with the Prague Open that was held this past May and a qualifying round for the 2013 CEV Volleyball European Championship slated for this September in Ostrava, the final four of the European League is one of the major events taking place this year in the Czech Republic. 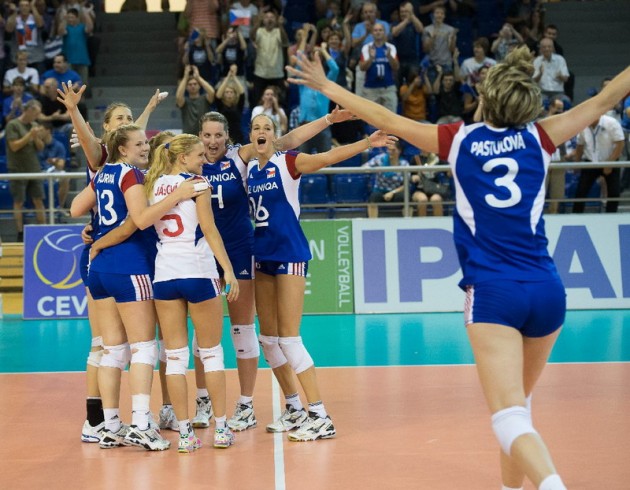 The home heroines (pictured) will be challenged at the local “KV Arena” by the national teams of Serbia, Bulgaria and the Netherlands. Actually the “Oranjes” are coming out of the same preliminary Pool C than the Czechs coached since this past February by Italian-born Carlo Parisi who used the prelims as an opportunity to test out some young players given that his side was pre-qualified for the final four as organizer. However, Parisi will be counting on all of his best players in Karlovy Vary as not only the European crown will be at stake there but also two spots for participating in the 2013 edition of the FIVB World Grand Prix. The Czech ladies will be playing the Netherlands in the semifinals and try there to prolong their positive record from the prelims where they defeated the girls in orange three times and suffered only one loss to the group mentored by Gido Vermeulen.

Serbia – the winner of the past three editions – sailed through the prelims win an impeccable record of 12 wins in as many matches and only once had to play a tie-break against Spain. The second-ranked team from Pool A, Romania, eventually finished sixteenth points behind the Serbians, thereby clearly showing the supremacy of the “Plavi” in that group.
As for Pool B which is to be completed this weekend in Metz, Bulgaria clipped 9 consecutive wins there and regardless of the results of the games taking place through this Saturday, the “Lionesses” from the Balkan peninsula will anyway finish atop of the charts in the group.

The “KV Arena” will be hosting again another major Volleyball event after last year’s prelims and 1/4 finals of the 2011 CEV Volleyball European Championship – Men had turned into a major success this past September. Tickets will be sold three hours before the start of the matches directly at the box office of the local sports hall and the daily entrance – i.e. valid for two games – will cost 50 CZK.