The Cuban team made 28 mistakes and suffered its third consecutive loss at the 2012 World Grand Prix Finals on Friday, downed by Brazil 3-0. 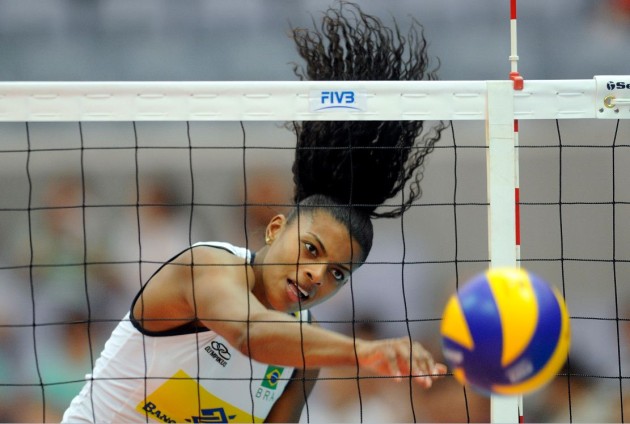 It was hotly contested early in the first set before Brazil pulled away from a 5-5 tie with a 5-2 run and led into the second TTO at 18-13. Taking advantage of the comfortable cushion, Brazil sailed to the victory in the opening set with a scoreline 25:17.

Cuba, who tried to gain their first win in the Grand Prix finals, committed a couple of mistakes and allowed Brazil jump to a 4-0 lead in the second set.

After Paula Pequeno made it 7-4 for Brazil with a kill, Yoana Palacios Mendoza served a ball short to give the Brazilians the 8-6 lead to come into the first TTO.

Despite the strong attacking power over the net, Cuba wasted several chances to level the game because of too many mistakes, including three from serving and two from receiving.

Menezes Thaissa pushed Brazil up at 17-9 with a pair success blocks, stopping Cuba‘s Ana Lidia Cleger Abel at the right side of the net and Mendoza at the left.

Cuba called a time-out but it didn’t work, Brazil rallied to the 23-11 thanks to a serving error and three spiking mistakes from Cuba.

Brazil then wound up the set with a pair of unanswered points as Pequeno finished the set 25-12 for Brazil with a high-flying hit.

Brazil jumped to an 8-4 lead in the third set, but Cuba fought hard back and pulled it back at 10-12 on back of stormy services of Allegne Yanelis Santos.

But a tricky drop from Marianne Steinbrecher helped Brazil extend the advantage and lead into the second TTO 16-10.

After the game resumed, Brazil steadily enlarge the gap to 20-11, a gap the Cubans could never close. Danielle Lins had a last block for Brazil to take their third consecutive win at the finals at 25-14.

ITA M: Modena – It starts from Lorenzetti, the coach that last won the Championship