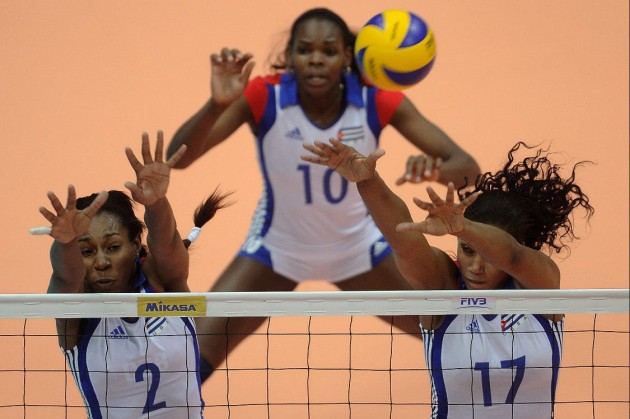 Kristin Richards celebrated her 27th birthday by scoring 17 points for America, while Megan Hodge added 17. Mendoza Yoana Palacios led the Cuban team with 11 points, but could not stop the US team cruising to the final victory.

Keeping a three to nil win-loss record at the finals before Saturday’s match, USA started strongly against Cuba, jumping to an 8-3 lead in the opening set. After the game resumed, the world No.1 USA steadily pushed forward the game into the second TTO 16-7 by dominating the game with its solid defense. Cuba’s head coach Gala Rodriguez called timeout twice, but could not stop America’s winning momentum. After an out-of-court serve error from Abel Ana Lidia Cleger, the US team was handed the set point.

The Cubans save two set points with a pair of ace serves from Rosell Wilma Salas, but Mendoza Yoana Palacios‘s spike was refused by American‘s defense as USA took the first set at 25-14.

Cuba rebuilt its defense system and fought back strong in the second set to lead 9-7 with the stunning performances of Palacios. Despite some mistakes, the Cuba team gave full play of its famous fast attack to maintain the two points advantage to 17-15.

Both teams then tied from 18-all to 24-all, until Kristin Richards tore off Cuba‘s defense to earn a 25-24 lead for the United States. As Alisha Glass‘s serve was unanswered by Cuba, the Americans clinch the second set at 26-24.

Tied at 5-5, Nancy Metcalf led the United States to a 5-0 run to establish an early lead in the third set. Cuba head coach Gala Rodriguez called for two timeouts, but his players failed to stop the winning momentum of the determined Americans. An ace serve of Richards helped the United States finish the set with an easy 25-14 win.