Germany opened third round of Pool B at the 2015 European Games in Baku with a win over Bulgaria, second in a row on the tournament. 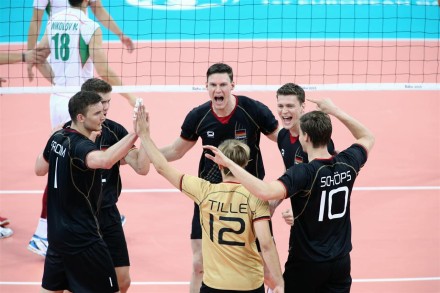 After losing to Russia in a premiere match at Azerbaijani capital, Germans defeated Slovakia and now Bulgaria with a convincing 3-0, partially 25-20, 25-18, 25-22.

German captain Jochen Schöps topped all players on a scoring sheet with 17 points. Todor Aleksiev had 11 in Bulgaria.

In the same pool, Slovakia caused many troubles to favored Russia, but „Zbornaya“ eventually showed its strength, winning in four sets and remained the only unbeaten team so far.

Russian Alexander Markin was the most efficient player with 17 while on the other side, Marcel Lux had 14.

In Pool A, Turkey took an emphatic triumph over Finland in straight sets, achieving its second victory in the competition with 16 points from Burutay Subaşı.

Preliminary Round / Pool A /

Preliminary Round / Pool B /

To see standings, more reports, stats and videos from this competition click on European Games 2015 M.

Osmany Juantorena: “I am Cuban, I represent Cuba, but I can’t play for Cuba”