Olympic champions USA will take on Cuba and Poland will play hosts Bulgaria in the semifinals of the FIVB World League 2012 on Saturday following the completion of pool play on Friday at the Arena Armeec in Sofia. 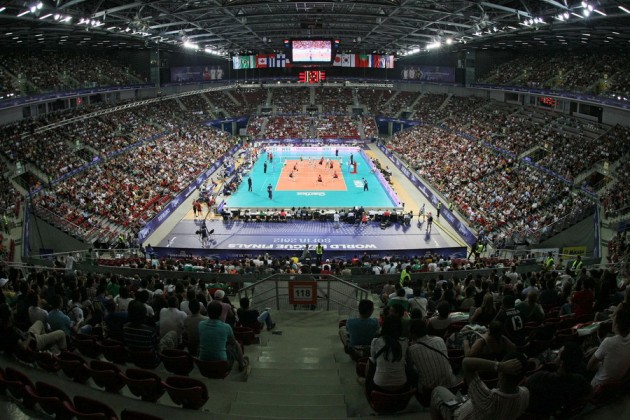 It is the first time all four teams have reached the World League semifinals together. USA and Cuba have won the World League title once each while Poland won their only bronze medal at the 2011 edition and Bulgaria’s previous best result is fourth in 1994, 2004 and 2006.

In the last two pool games on Friday, Poland claimed top spot in Pool F after a convincing 3-0 (25-23, 25-20, 25-23) win over Cuba, who finished second, thanks to 17 points from Zbigniew Bartman. It was Poland’s ninth win in 20 games against Cuba including the last two matches following another straight sets win at last year’s World Cup.

USA, meanwhile, were equally efficient, taking care of Bulgaria 3-0 (25-21, 25-16, 25-17) in Pool E. Matthew Anderson and Sean Rooney’s 15 point contributions were the game high. With Bulgaria already confirmed in the semifinals, it was only left to see if USA, who had one point from Thursday’s five set loss to Germany, could pick up enough points to pass Germany’s two in the group and this they did in style to send World League Finalists debutants Germany home.

USA’s win, only their fifth in 17 matches against Bulgaria, also confirmed Brazil to sixth place after the world champions collected only one point in pool play, signifying their worst ever finish in the FIVB’s annual men’s competition. The world No. 1 had previously finished fifth five times, the last being in 1998 from which time they had won eight gold, two silver and two bronze medals.

Saturday’s semifinals will see USA take on Cuba in the opening game, a match up which dates back to the 1966 World Championships. The Olympic champions have won 13 of the 20 encounters including continental championships. USA have won five of the last six against Cuba with their last victory coming at the 2011 World Cup, which they won in five sets.

The Poland–Bulgaria clash, meanwhile, dates back to the first ever World Championships in 1949 which Poland won to win bronze. Since then Bulgaria have claimed 24 wins against Poland’s 19 however last year’s World League bronze medallists have won seven of the last 10 matches. Bulgaria won their most recent encounter 3-1 at the European Championships but Poland claimed the honours during pool play at last year’s World League Finals in five sets.