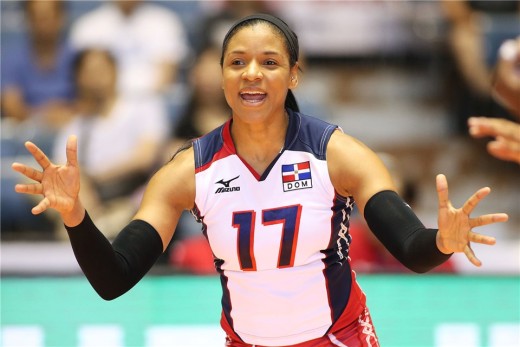 Gina Mambru was the most dominant player with 17 points. The girls from Kenya didn’t have solution to stop her, although they were close to win the first two sets.

The head coach of Dominican Republic Marcos Kwiek was vey satisfied with the win, but captain of the this team Prisilla Rivera criticized:

“We made too many errors and lacked concentration at times. It was good we could win, but I’m not satisfied.”

“It was a good performance by the Dominican Republic. We wanted to win and we must improve. My players fought well and showed charaacter in the first two sets, but we lost spirit after the second set. We lack the experience at closing out matches at this level. We hope to overcome this with time.”

The captain of Korean team Kim Yeon Koung criticized herself:

“Yesterday, we lost an important match. Today, we were able to win and play better. I’m satisfied that the team won and that’s good, but I’m not so satisfied with my own play. The coach pulled me today because my condition wasn’t so good and we have a lot of games to play.“

“Congratulations to Korea. This Peru team didn’t have enough time to prepare and two players who should be here are in the under-23 competition while two others are preparing for the under-20 tournament. Also, we don’t have many backup players and two of those are under-16 players. Still, today at the start of the second and third sets we did well but couldn’t sustain our performance. But we did some things OK and want to concentrate on our good points.“

WCH U19 M: Poland will play for gold