Finland and the hosts of France opened the third-round qualification tournament for the 2012 CEV Junior Volleyball European Championship in Saint-Jean d’Illac with a couple of wins over Ukraine and Austria respectively. 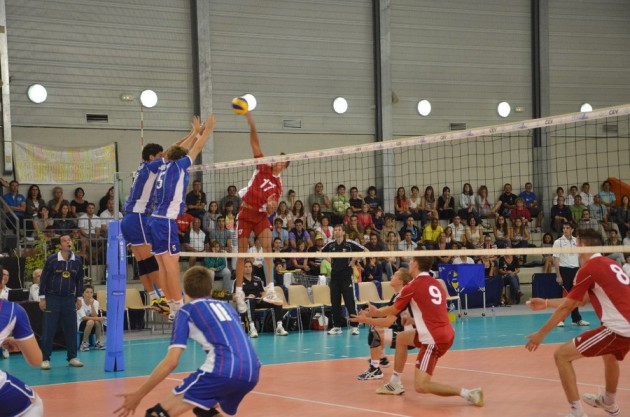 The tournament started with Finland downing Ukraine in straight sets (25-18, 25-23, and 25-16) to take maximum points from that match. Only the second set was close, otherwise the “Suomis” did impose their pace and evidently asserted their supremacy. Miikka Lemola and Niklas Seppänen top scored for Finland with 15 points apiece. “I am satisfied with the result and even though we had some problems in reception, our libero played an excellent game and Lemola also backed up our defense line” says head coach Pekka Lahtinen. “We can realistically claim the second place in the group but first we need to edge Austria. This is a very tough opponent and I remember they were even leading 2:0 while playing Germany in their second qualification round in Ankara this past April” he stresses. Finland and Austria will be crossing their ways on Thursday with the match starting at 4.30 pm local time.

The home heroes of France needed five sets to edge Austria in their opening match (14-25, 25-19, 22-25, 25-16, and 18-16) after a real marathon that confirmed once again the absolute value of the young boys in red and white jerseys. Maximilian Thaller & Co. stormed out to 8:1 and 19:9 leads in the first set to assert their intention to cause a surprise right by the start of the tournament and the local favorites had to come back twice from one set down. France eventually called for the tie-break and went up 10:7 there but Austria responded with the spikes by 206 cm tall Aleksandar Blagojevic (he totaled 25 points at the end of the game) to score the next four rallies and to turn the charts around. Austria dissipated three match balls and ultimately Gaël Tranchot cashed the first opportunity for the home side to finish it off with the score of 18-16. Head coach Jean-Manuel Leprovost was happy with the final result and especially with the attitude showed by his guys: “The mindset made the difference tonight” he said. The next test for the hosts will be against Ukraine with the match coming up on Thursday at 7 pm.

Finland currently tops the standings of the group with 3 points, with France and Austria following with 2 and 1 respectively, while Ukraine rounds out the charts with 0 points. The winner of the Pool qualifies for the final round of the European Championship coming up later this summer in Gdynia (Poland) and Randers (Denmark) while the runners-up will have to wait for the results of the other group scheduled for later this week in Zocca (Italy), as only the second-ranked with the best score will book a ticket to the finals.

AUT M: Jimenez is the new opposite of Innsbruck