With the Olympics practically around the corner, Brazilian Marcos Kwiek is bringing his full Dominican Republic squad to warm up for the London Games during the eleventh edition of the Women’s Pan American Cup. 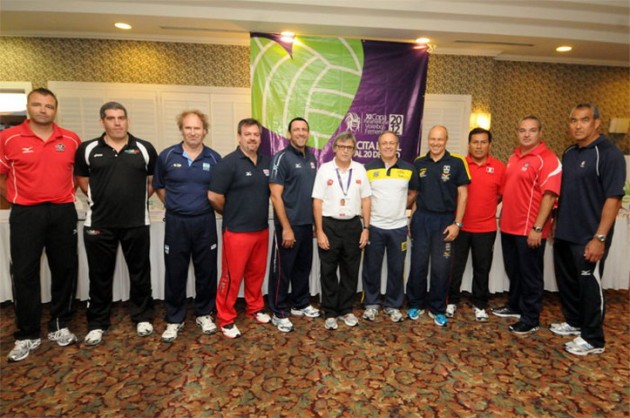 Two other sides qualified to the Games –Brazil and United States– will be represented by a junior team in the case of the South Americans while the Americans are bringing a mix of seasoned veterans with promising young athletes.

Eleven of the twelve coaches –Cuba were scheduled to arrive near mid-night on Wednesday- commented about their goals ahead of the start of the competition, a qualifier to next year’s FIVB World Grand Prix.

The top four ranked teams from NORCECA Confederation and the top ranked team from South America –other than Brazil that is automatically qualified- will be granted tickets to the premier annual women’s competition of FIVB.

Here the excerpts of the coaches’ comments made during the preliminary enquiry and the general technical meeting.

Horacio Bastit (Argentina): “We arrive here well prepared. We just played the Pre-Olympic and the Grand Prix. For us it is always special to have a good performance in the Cup since it is qualifier to the Grand Prix. Georgina (Pinedo) comes here without play due to surgery and this will be her first competition. Yahel Castiglione and Emilce Sosa are two experienced players who had a good Grand Grand Prix.”

Claudio Pinheiro (Brazil): “We are here with junior players we want to test with the senior team. We expect a very strong competition, with very good teams representing their countries. We are going with the intentions of achieving the best possible place for Brazil with this side of young girls.”

Arnd Ludwig (Canada): “After taking part in the Pre-Olympic, we have decided to renovate the team a little with some young players with their first experience, but we also have other experienced ones like Sarah Pavan and Brittany Page. The team is looking well and we are ready for the tournament.”

Mauro Marasciulo (Colombia): “Our team is made practically of junior players with some senior players and we are preparing for the Junior South American to be held in Peru next October.”

Javier Perales (Costa Rica): “We come with a team with changes since Mariela Quesada and Marcela Araya returned from the universities and they have been training with us since May. This is another chance for us to play against the national teams we compete with year after year.”

Marcos Kwiek (Dominican Republic): “The team has been practicing for a while aiming towards the Olympics and now we have the stop of Juarez which is a very important competition to get a berth in next year’s World Grand Prix. We have a mixed team in our last chance to prepare the players and get the teamwork.”

Estanislao Vachino (Mexico): “The team is doing well, training normally and we will try to have the best possible tournament and finish among the top six in this championship. We had 18 girls for 12 spots and we have the 12 that practiced better and we really had a good training yesterday.”

Edwin Jimenez (Peru): “We have three players with experience like Elena Keldibekova as captain, Vanessa Palacios the libero and Brenda Uribe. The rest are young girls like Rafaella Camet and Ángela Leyva, who is 15 years-old, with a very young team with an average of 20 years-old. We hope to put a good show and to battle for the title.”

David Alemán (Puerto Rico): “It will be a Cup with a lot of quality with more teams than last year. Our expectations are to get the last qualifying spot of NORCECA to the Grand Prix. We are bringing Shara (Venegas) in the libero position and some juniors we want to give them the experience ahead of the next Olympic cycle.”

Francisco Cruz (Trinidad y Tobago): “Like every year we want to improve a little bit more, taking one more step forward. I see our team in better shape than last year. We have the complete team with the players who are in Europe, since they were not with us last month during the Pre-Olympic.”

Reed Sunahara (United States): “This is good tournament and we plan top play hard and do things well. We know the competition will be a tough one with teams of good level. We hope to have a good competition with very good players both the young and the experienced ones.”