WC M: Italy on the run against Venezuela for straight-set win 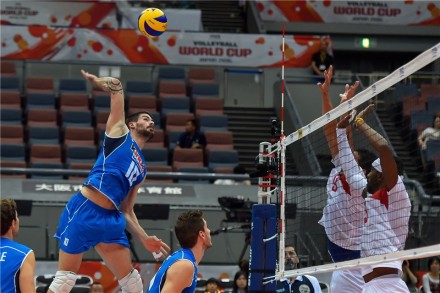 Italy began the match authoritatively with a confident win in Set 1. It was already 8-2 on the first TTO. Lanza had a crucial role in his team in the second half of the set to give Italian side 21-12. When Vettori smashed a few 3rd meter spikes in the finish, including the last point, Italy took Set 1 (25-16).

Second set was much tougher for the favorites. The only things that separated two teams before the first TTO were two attacking errors by Venezuelans 8-6. The Italian players weren’t on a spectacular level of play as well, but even that was enough for them to get 20-17. Piñerua did his best in the finish, but it was already too late 25-22.

The greatest fight was seen in the third set, although the final score doesn’t show it. Italy simply couldn’t get a comfortable lead and Venezuela was on fire, taking 14-12! The South Americans suddenly stopped, but it had to be admitted that Italy began to play some astonishing defense with perfect counter attacks to follow. Italians made 4-0 run (16-14). On 21-18, Giannelli stepped on a service line and didn’t move until the end of the match (4-0 run), scoring two aces for 25-18!