Despite the late withdrawals of two teams, US Virgin Islands looks set to host another exciting volleyball tournament, its fifth for the year, as the 14th Senior Men's Caribbean Zonal Volleyball Association (CAZOVA) Championship serves off on Monday. 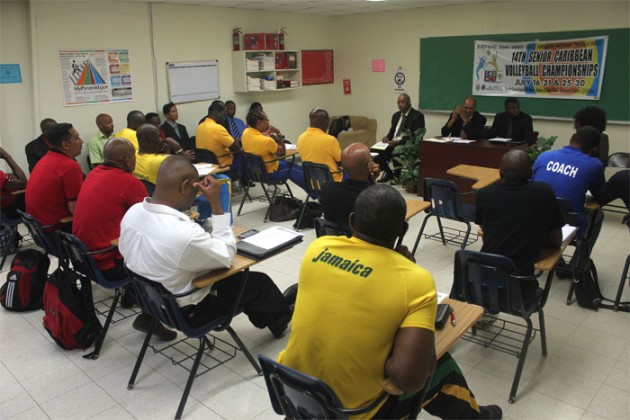 The seven-team tournament will feature defending champion, T&T, perennial kings and record ten-times winner Barbados, 2008 winners’ Martinique and Jamaica facing off in Pool A from which three will qualify to the quarterfinals.

Host USVI, Guadeloupe and Bahamas are in Pool B, which comprises a trio of non-winners who have all booked last-eight places already.

Originally Suriname, which hosted in 2010 and Curacao were expected to compete in this year’s event but had to withdraw because of financial reasons which allowed Martinique to fill a spot.

The tournament’s technical meeting chaired by Mushtaque Mohammed, President of the Control Committee along with its members Daymian Stewart (VIS Delegate), Lucille Hobson (Chairman of Sub-Appeal Committee) and Nigel Simon (Press Delegate) also met with officials of all the participating teams.

During the meeting Mohammed noted to all the teams the importance of this event as it served as a qualifier for CAZOVA teams to the Continental Championships.

Mohammed also pointed out it was the first time that CAZOVA was staging the men and women competitions separately since its inception in 1991 and applauded the Virgin Islands Volleyball Federation for hosting its fifth CAZOVA event in under three months, with one still to come.

Martinique was also praised for making a return to the tournament after missing out on defending its title in Suriname 2010.

Hobson, who is also the president of the Virgin Islands Volleyball Federation welcomed all the teams to the island and expressed hope that they enjoy their stay and have a great tournament.

A minute of silence was also held in memory of former president of the Bonaire Volleyball Association, Jorge Nicholas, who Mohammed described as one of the hardest working officials in CAZOVA. Nicholas died last week while recovering from surgery in Holland.