European-based Marc-Anthony Honore led a balanced T&T attack to a tough four-set win over perennial champions Barbados in a fiesty contest to improve to 2-0 in Pool A and book a quarterfinal for the least at the 14th Senior Men's Caribbean Zonal Volleyball Association (CAZOVA) Championship on Tuesday night. 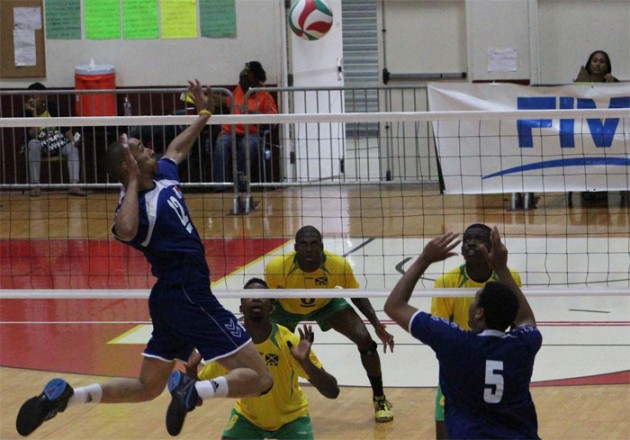 Ryan Stewart added 16 points, Jessel Davis and Sean Morrison got ten points each and captain Nolan Tash, seven for the winners to put the Barbadians on the brink of elimination from the main draw of the tournament for the gold medal.

Speaking after the match Barbadian Nedd said, “Congrats to T&T, they played a very good match. We also played a lot better as a team, and despite the loss we will take a lot of positives into our must-win match against Martinique (1-1) on Wednesday.“

T&T‘s Tash noted as a team his players were confident of getting a win against its fierce rivals, whether the match went to three sets, four sets or five sets.

“Sports is about momentum and Barbados dominated for a long period of years, but I believe now is our time and we intend to rule for a good period of time as well,” boasted Tash.

Captain Prince-tanique Wilson topscored with 14 points as Bahamas announced its participation at the 14th Senior Men’s Caribbean Zonal Volleyball Association (CAZOVA) Championship with a straight sets win over Guadeloupe. The Bahamians, after being on a first-day bye in Pool B coasted past Guadeloupe 25-17, 25-20, 25-13 in 73 minutes.

For the Bahamians who held a 21-8 advantage on service aces, Renaldo Knowles added ten points and Byron Ferguson chipped in with eight as they seek to improve on their third place finish from 2010 in Suriname.

Guadeloupe, which failed to re-discover its form which it displayed against host USVI, Heindrick Perrot led with eight points while Bruno Cottelon and Loic Couchy added six apiece, and Alexandre Watson and Eric Mondongue got five points apiece.

Wilson, captain of the Bahamas team said it was good for his team to start off with a win.

“We started off well with our service game which gave us a good momentum and our setter did well too.“

“Overall I think we had a great match as we executed our game plan very well and now we must prepare for USVI before we look to the quarterfinals,” he said.

Following its four-set loss to reigning champion, T&T on Monday night, Martinique, the 2008 winners’ needed a win to stay in the hunt for the top spot in the four-team group and an automatic semifinal place.

The Martiniquans, who were assisted by Jamaica‘s 39 errors, especially at crucial intervals in the match was led by Gregory Alpha‘s with 17 points while captain, Rodolphe Maignan added 15.

Loris Christine and Michel Larcher chipped in six points each for the winners who held a 9-7 and 14-10 advantage over Jamaica in service aces as as well blocks respectively.

Jamaica, which could have sealed a quarterfinal spot for the least with a win, got match-high 20 points from Ryck Webb while the trio of captain Dellan Brown, Conaradio Taylor and Mark Lewis got 18, 13 and ten points respectively.

“It was easy for us tonight even though we got a win,” said Martinique‘s Maignan. “We tried our best to improve our performance from the first match against T&T and today we fight for every point and got the victory which keeps us right in the mix.”