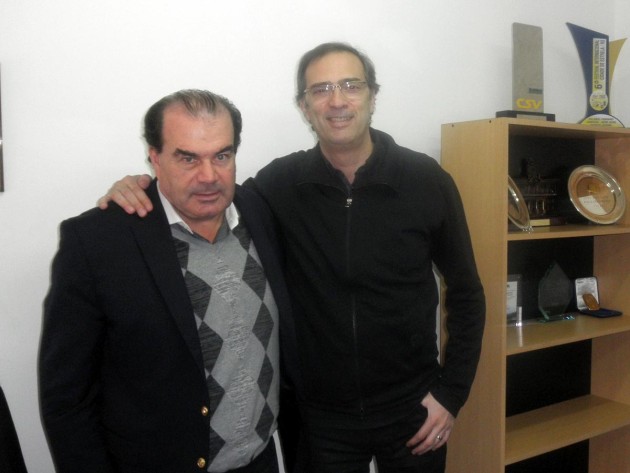 Looking back at his recent Curriculum Vitae, Castellani obtained titles with Fenerbahce – Turkey (where he coached the present Argentine Seniors’ captain, Rodrigo Quiroga) and with the SKRA Belchatow – Poland, as club teams but his experience with the Polish team gave him the chance of coaching the Polish National Team, winning also championships. The last two seasons he has been coaching the National Team of Finland.

While visiting the FeVA, Castellani gave his balance of Argentine Volleyball all together, inside the federation and the idea of Argentine volleyball around the World. “It was a nice surprise to see where and how the Federation stands now. It is a neat organization of high level and working conditions are outstanding. From outside the country, Argentina is seen with a Federation that during the last years has been working hard with the grass-root categories and developing volleyball all over the country“.

Also, he pointed out the outstanding growth, for the World, of the Argentine League. “Each time more players start asking themselves about the conditions of playing this national league. They mention that reading in internet, they see that the same is very competitive. The Argentine League is not more a local league but is recognized worldwide“.

About the Argentine National Seniors‘ team, he showed a great balance. “We have a new generation, young, talented resulting from the work I mentioned before (the grass-root categories). Adding to this the fact that the coach Javier (Webber) gave these young players the development and experience they need to grow into a competitive international team of high standard“.

When looking to the future Castellani goes carefully. “We never know how far a team can advance but no doubt it is a very young talented group of volleyball players that can reach very far. We have to be happy of this new generation, we must feel pride. We can not stop with their final achievement but with the path they go along. The, the future will tell if they win or not but the effort of all involved is done“.