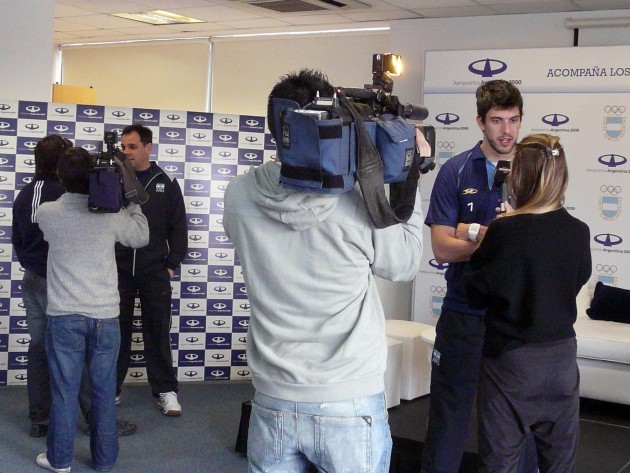 As it happened during the whole last period training at Cenard facilities, the Media supported the team, this time leaving Buenos Aires to Great Britain via Poland. At the airport facilities the Argentine delegation had its last contact with Argentine journalists in Buenos Aires at a special hall prior to taking off.

Starting Friday and finishing Sunday, Argentina will participate of the 10th edition of the Memorial Hubert Wagner tournament v the host team of Poland – rival at the first round of the Olympic Games, Germany and Iran. With reference to the same Javier Weber, coach of the team expressed: “it will be an ideal competition to measure our level. The rivals are very strong teams so we will have three terrific matches. The matches will be very useful to try some things with the team and to make last minute adjustments“.

Weber also mentioned how the team stands now. “We are fine. We prepared ourselves very good and we still have a week and a half to keep training“.

There is also a chance of some other friendly matches with the host team – that won this season’s FIVB World League a couple of weeks ago. Argentina then will travel to London where it will face in the first round, Poland, Bulgaria, Italy, Great Britain and Australia with the last being the first rival with another Argentine coach, Jon Uriarte, on July 29th.