This was one very long and uncertain match at the beginning of the European Championship 2015. Serbia defeated Slovakia after five sets and the referees made this match more uninteresting with long video challenges and many confuse decisions. 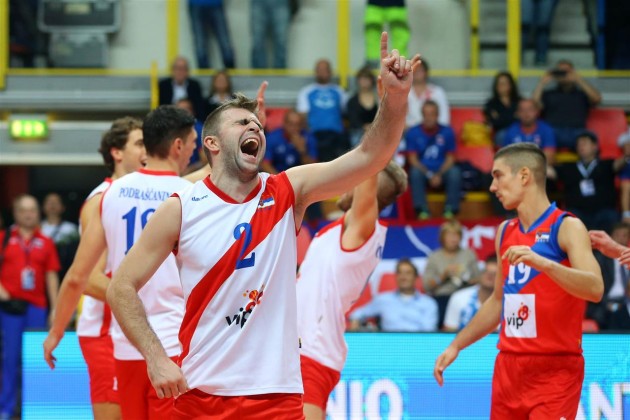 Slovakia opened match with leadership of 8-6 and after few good attacks Serbia made turnaround for 11-9. After many challenges and Serbia won this set 25-22.

In the second set Slovakia once again started with 12-9 and 18-16 when Serbia equalized on 18:18. Until end Slovakia were good at the net, while Serbia made so many mistakes and finished set 25-22 for 1-1.

The third set belong to Serbia but only thanks to the referees. Serbia had set point 24-23 after good attack of Podrascanin but Slovakia equalized four times. They had 28-27 when Atanasijevic threw the ball out. Coach Grbic called video check and referees said that ball touched the Slovak block although the video showed different. Block of Lisinac and Atanasijevic finished this set 30-28.

In the fourth set Serbia played well but only until 16-12. After that team of coach Giuliani took a breath and started with good performance. They came to 16-16 and 18-18 even led 21-18. Slovakia  had two set points 24-22 but Serbia equalized 24-24. Last point for Slovakia won Patak with block over Atanasijevic 26-24.

Serbia opened tie-break with 4-1 and 8-4. That was a sign that they will win the game. The result in this set was 15-9 for Serbia who scored the first win at championship.

Aleksandar Atanasijevic was top scorer in Serbia with 28 points while Peter Michalovic scored 25 for Slovakia.