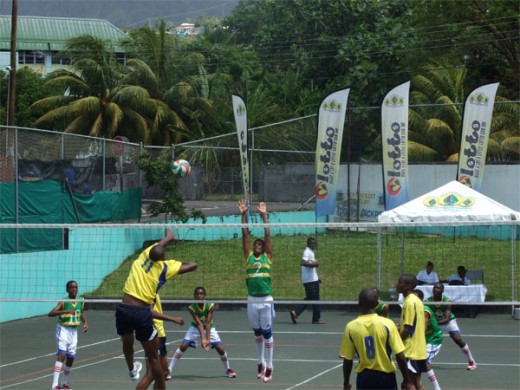 Martin said that the introduction of the sport in the primary schools is being targeted for the new school year which begins in September.

Seen by Martin as the cradle, who said, “the primary school is the best way to get the youngsters into the sport”.

“We are trying to build on the rise of Volleyball here and no better way that to do it, but with the youths”, Martin said. “This will be basically an introductory process which will be built on when the students go to the secondary schools”, Martin added.

Martin singled out the secondary schools competition and the national male and female tournaments, which are set for resumption soon, as testimony of the reclaiming of volleyball as a main stream sport in St Vincent and the Grenadines.

At present, Martin suggested, “Volleyball is enjoying a new resurgence in interest and popularity. We are seeing persons who were once in the sport coming back and we are also seeing new persons getting into volleyball.”

This rebirth in Volleyball said Martin began since in 2010, and that the resurgence has been both on and off the court.

Apart from the tremendous amount of ground work done by current executive in advertising Volleyball, recent successes of national teams on overseas missions have sparked a rerouting of rewarding efforts.

This he said was another boost as the schools’ team claimed of both the male and female volleyball titles at the Windward Islands schools’ games in St Lucia in 2010.

In 2011, the junior male team won the male ECVA competition in Anguilla which qualified them for 2012 Continental Cup in Colorado Springs from 25th August to 2nd of September this year.

In April and June, both the male and female senior teams, placed second to St Lucia, and head to the second round of the FIVB World Championships and to the finals of the EVCA competitions.

The males will do battle in St Lucia, with the females contesting the six team competition in Antigua and Barbuda.

These Martin said were achieved despite his association not having a home court or an indoor facility, like the other territories.

Martin though is thankful to the principal of the Girls’ High School, Andrea Keizer- Bowman, who has permitted his association the use of the school’s hard court and other facilities.

In outlining the plans for the remainder of 2012, Martin said that the St Vincent and the Grenadines will have a presence at the FIVB 33rd world congress in Anaheim, California September from 17th to 22nd.,

POL M: Kosok – The team is our strenght