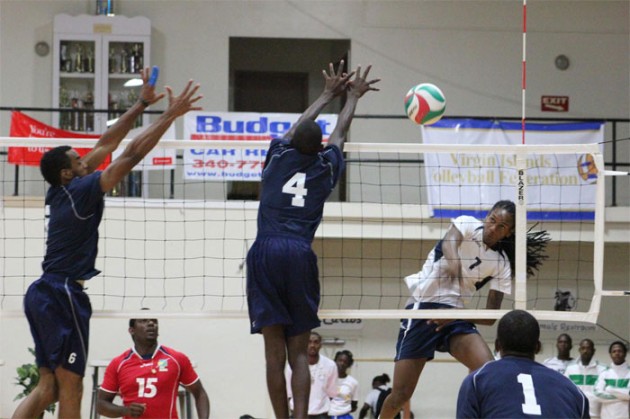 Ferguson had a match-high 22 points while captain Princetanique Wilson added 21 and Ronaldo Knowles 18 for the Bahamians who out-blocked the inconsistent Barbadians 15-11 and held an 8-3 advantage on serves.

Fabian Cox tallied 20 points to lead Barbados, Shawn Simpson contributed 18 and Akeem Payne, 11 but it was not enough in the end.

“We did not do too bad considering the 0-2 start we had in the tournament. What we have to do now is come back and get the bronze medal by improving on the weak areas in our game.”

Wilson said, “Both teams wanted the victory badly tonight and during the match we both had roller-coaster performances but in the deciding set our blocks played a key role in helping us get the win.”

T&T captain Nolan Tash led the front for the second straight match as the defending champions swept Jamaica 3-0 to move to within one win of retaining its title on the penultimate day of competition.

The “Calypso Spikers” inspired by Tash’s 16 points, 13 from Marc-Anthony Honore and ten from Ryan Stewart defeated Jamaica 25-20, 25-21, 25-21 in 71 minutes in the first semifinal. Ryck Webb was the lone player in double-digits for Jamaica with 11 points.

Tash thanked Jamaica for a match well fought but said his team knew its opponents were short on numbers and would have found it difficult to maintain its high level of play from their previous meeting.

“We also had a game plan to go out and win a straight sets to try and get some extra rest ahead of the final and now that we have accomplished that we are sending a warning to whoever we meet in the final that they must come prepared to face a tough T&T team that has no intention of letting its title out of its grasp.“

Host US Virgin Islands had the last laugh on Guadeloupe as it registered a battling five-set win to secure fifth place on the penultimate day of competition on Friday night.

UKR W: Is this most viral volleyball...