We can say that Zevzda's child returned home. 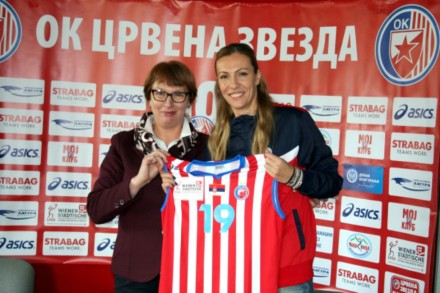 Ivana Đerisilo one of the famous Serbian player has returned to Crvena zvezda after 12 years!

During the next 12 years she played in Italy, Turkey, Switzerland Romania and Azerbaijan and in the last season she was a member of Romanian CS Volei Alba BLAJ who won the title.

Ivana  was a member of the Serbian National team until 2013. and she was a part of the bronze team who won the first medal in the history of the World Championship 2006.

“I want to thank everyone, and especially Ana Avramovic and Aleksandar Boričić who 1995. gave the opportunity to a little girl to become a good person and volleyball player as it is now. This is my house, the house in which I started my career. What I can guarantee and promise is that I will, with my long-time captain in the National team Vesna Čitaković give our best to convey these girls and make them good people and good players. Our first step is to return title in our hous” said Ivana Đerisilo .

Since August Ivana practicing with the team and from the fifth round will wear jersey number 19.