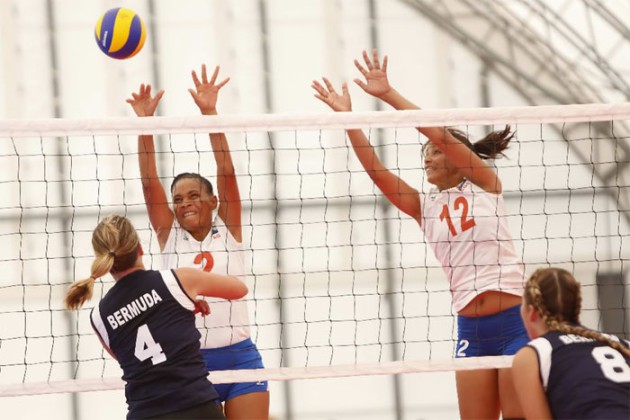 The game was not as easy as the score suggests as Anguilla was really made to work. In fact in the first set Bermuda had a four-point lead (20-16) when Anguilla called a time out. On the resumption Anguilla reeled off 7 unanswered points before taking the game at 25-21.

This seemed to have knocked the wind from the sails of the Bermudans as the second set was easier for Anguilla (25-16).

Coach Jason Liburd of Anguilla thought that it was a tough game. “No game is easy until the end. We found that this was a good test for us since we have been training hard without much quality games so this was an ideal test for our first match,” he said.

Liburd pointed to the attack of Suzan Webster and the serving of Khalidah Banks who combined to provide most of the points for team Anguilla.

Captain Banks was obviously jubilant at the end. Her job was to encourage the troops at times when they were down. “I simply told them to go back to the basics of cover, pass and defend. Do not underestimate them and play your best and that just what we did today”, she reported.

Captain of the losing team Victoria Stevenson was not disappointing in spite of the defeat. “I was impressed the way our young charges played. The truth is we play against a team that played very well as a unit. I kept encouraging them to just focus on one point at a time and to ensure that they do their role,” she told the press.

Coach Blee was all smiles: “I think that we can take away a lot of positives from this game. There were times when we shining and time when we had to comeback, she said. She attributed the loss to losing focuses at crucial moments.“

OG M: “Everyone was pumped at the start” says GB captain Ben Pipes