OG M: “Everyone was pumped at the start” says GB captain Ben Pipes

It was a very emotional moment as Team GB celebrated its first Olympic appearance on Sunday morning at Earls Court and even though the match ended up in a 0-3 defeat to Bulgaria, still this is a moment the home guys will remember for the rest of their lives. “I do not think I was nervous at the start” says captain Ben Pipes. “Everyone was pumped. We got up at 5am and have done so for the last few days. We had a very light training session at 05:20 this morning, but you could open the door and it could be morning or midnight - we just adapted to it”. 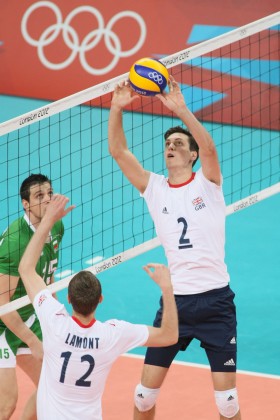 “I absolutely loved it. I had to contain myself and keep my head low. As soon as the game starts it is us on the ball. We talked in the locker room, knowing that the GB team was going to make history today” adds Dami Bakare.

“We are the first ever GB Olympic volleyball team. We know we can compete with the others, and we want to prove it”.

As for the result of the match against Bulgaria, Pipes stresses: “Personally I couldn’t find my rhythm early on. I let the team down in the first set. We started playing our game in the third set where our reception was good and our blocking was also ok”.

Bakare has some regrets especially as his side was close to claim set 3: “We need to believe that we can finish it even when your heart is pounding. We lost today and the crowd was great. Imagine how that would have been if we had won”. The next stop of GB Olympic campaign will be on Tuesday against Australia. “It should be a good game, very noisy, and we know most of their players”.

Christopher Lamont explains it still takes a while to take Team GB forward: “We’ve only been together two to three months. We really suffer from very little funding. We only managed five friendlies and we need more experience at this level. Then we’ll be able to see sets out”.

Bulgaria’s Nikolay Nikolov celebrated today his 26th birthday with that splendid win over the home heroes. “It’s a really great present and I’m really happy we could win. It’s an interesting occasion to celebrate my birthday because we have to be in the Olympic Village but I will try to eat some sweets and get some drinks with my teammates but we still have to play and be focused for the next days”.