Larissa Franca & Talita Antunes is the duo that emerged victorious from the dramatic final of the BRL 420,000 women’s tournament of the Brazilian Open Beach Volleyball Tour fifth stage in Curitiba. 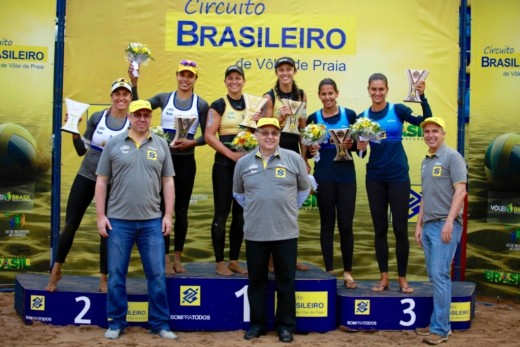 For Larissa & Talita, who teamed up in the middle of 2014, this is the tenth overall gold on the national tour, and third this season after winning in Brasilia and Contagem.  With the 400 points they took in Curitiba, they stay on top of the rankings with a total of 1,920 points from the five stages.

“We had our bad moments in the second set, but we learned to be patient. Once again we were partners on the court. This is very important and makes difficult times become easy,” Larissa commented. “I am very happy with the ending of the season. I think we deserved it, because we worked very well throughout the year – not only in terms of results, but also in terms of teamwork, commitment and growth.  Now we will enjoy some rest.  2016 is an Olympic year and we want to make the best out of it.”

The Brazilian Open Beach Volleyball Tour resumes in 2016 with the next stage set to take place in Niteroi in January.