Colombia, Uruguay and Paraguay are the countries that booked the last three available spots at the final stage of the women’s South American Beach Volleyball Continental Cup next year, which will also be a qualification tournament for the Rio de Janeiro 2016 Olympic Games. 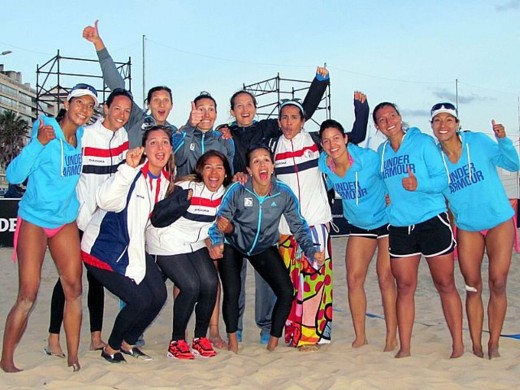 They will join Chile, Venezuela and the host of the finals Argentina from June 21 through 26 in the battles for the single ticket to Rio that the CSV Continental Cup has to grant.

During three days of competition at the Arenas del Plata in Montevideo, five national teams, consisting of two pairs each, played each other in a country-vs-country format.  At the end of the second day it was already clear that Colombia and Uruguay would make the cut.  The big question on the third day was whether Paraguay or Bolivia would book the third spot.

The matchup between Colombia and Uruguay would only have to decide who wins the first place in Group F.  The Colombian duos Andrea Galindo & Claudia Galindo and Diana Rios & Ayala Yuli spoiled the day for the home fans by piling up four wins against Lucia Guigou & Maria Eugenia Nieto and Lia Fortunati & Fabiana Gomez and claimed the top of the standings. But it was no easy ride for the Colombians as three of the four matches ended in 15-13 tie-breaks.

Watch over ten hours of video recording from the last competition day in Pocitos:

South Korea: The most shameful period in...