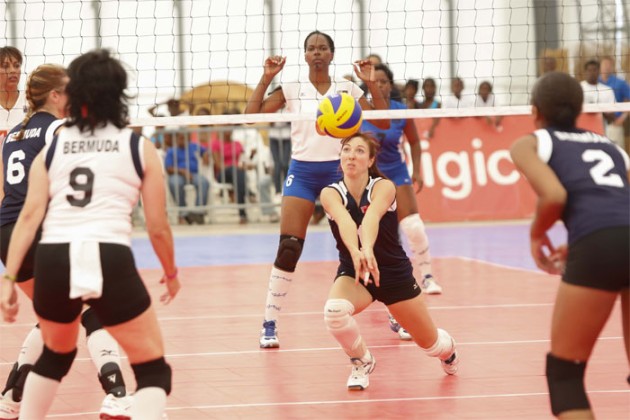 Shari Matthews‘ 18 points led Barbados that also benefited of 16 and 13 from Anica Wood and Avara Brown respectively. For Bahamas, which will meet Guadeloupe in the playoff for fifth place, Cheryse Bain and Kelsie Johnson each had 11 points.

The Barbadians also dominated on blocks and service aces, 10-8 and 16-9 respectively while committing 32 errors to Bahamas’ 20.

In the second match of the double-header on Friday, host country, US Virgin Islands set up a much anticipated semifinal meeting with three-time defending champions and four-time winners, Trinidad & Tobago after battling past Guadeloupe in five entertaining sets. USVI won 25-18, 19-25, 25-14, 23-25, 15-13.

Valissia Brathwaite was once again the top scorer for USVI with 23 points, which included 16 kills while Danielle Selkridge added 14 and Janelle Sarauw 12 for the winners who dominated on service aces, 18-3 while it trailed on blocks, 12-14.

For Guadeloupe, which had to deal with the absence of one of its players due to illness in the third set, Amandine Mauricette had a team-high 17 points and captain Isabelle Acina 12 in the loss.

Thonya Joseph, the victorious Barbadian captain was delighted her team did a better job allround than in their previous matches. “We had a much better game with our serve receive passing which allowed us to get our attacks going. Also on the defensive end we were better in our positioning and we are just glad for the win and will keep working because we want to get to the final.“

Speaking after the match Krystel Rolle, captain of Bahamas said she her team started well but then fell apart. “We got off to a slow start but managed to come back and win the first set, but in the second and third sets we broke down mentally and by the time the fourth set came around we had already dug ourselves into a hole, which we could net get out of.“

Joe Smith, coach of the Bahamas squad which will now play for fifth and sixth spot on Saturday said his team needed to be more consistent to have a real impact on the game. “Congrats to Barbados though, for a well played game but our passing tonight was horrible while on the defensive end we found ourselves out of position too many times.“

Andrew Brathwaite, coach of Barbados was quick to point out “it is always a tough battle for his team when it comes up against Bahamas and tonight was no different. However, tonight our team was much more consistent and they stuck to the game plan and executed better as a team, while on the defence we nullified their attacks.“

Melissa Simmonds, vice-captain of USVI said her team-mates started off strong, then slowed down.

“It was a competitive match and we put together a complete team effort. Even the players who came off the bench, came in and played excellent. Credit to Guadeloupe they played a good match but we had an all-round team effort and in the end got the victory.”

Acina commenting on the match said, “We wanted to reach the semifinals, but tonight we came up against a good team. For the result we are not satisfied with the outcome but we can take some positives in that we were better with our service game today.“

Desiree Miranda, assistant coach of the USVI was quick to point out it was an excellent match by both teams. Guadeloupe came out in full force and played a tremendous match and pushed us to the limit.

“They played with a great togetherness and even though one of their players fell ill in the match, they continued to fight, so I congratulate their team and coach. As a team we had to work hard to beat Guadeloupe but it was a hard fought match. We want to win because we are playing at home and we want to show our spectators that volleyball is here to stay.“

Jean-Louis Delag, Guadeloupe coach said his players were not satisfied with the result of the match because they wanted to win, but for him he was satisfied. “We tried to fight but tonight we came against the host country and they did not want to lose.They played a great game and fought for every point. But we enjoyed the match very well and the atmosphere. For me volleyball is a pleasure win or lose.“