USA cruised to a straight-set victory (25-17, 25-20, 25-16) over Serbia in 1 hour and 12 minutes to continue undefeated in Pool B with 12 points and a win-loss record of 4-0. The Serbians are still looking for their first victory in the tournament. 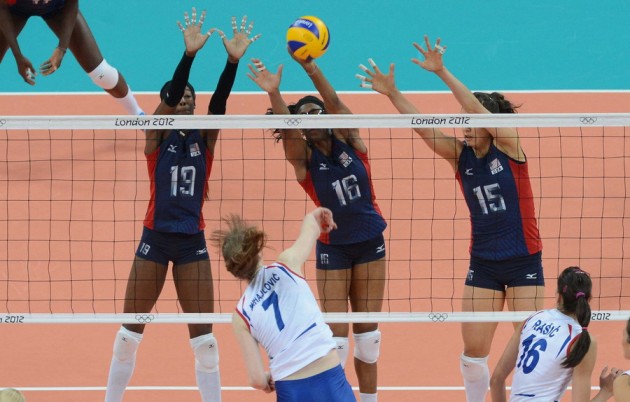 The Americans, who only committed 8 unforced errors for the whole match, outblocked Serbia 15-3 and served 3 aces to 1 from the defeated side.

Destinee Hooker once again topped USA in the score charts with 19 points, including 6 blocks, while Foluke Akinradewo had five blocks among her 11 points and veteran Logan Tom contributed 12 points.

Serbia’s Brankica Mihajlovic finished with 13 points as the best for the losers while Jovana Brankocevic and Milena Rasic each finished with 8.

USA trailed 6-3 in the first set when Destinee Hooker took over and scored three consecutive points with two kills followed by one ace carrying the Americans to an 8-7 lead at the first technical time-out. Then it was the turn for Logan Tom who landed several spikes to expand the lead at 16-9. The Americans never looked back and sealed the set 25-17 with a smash by Tom.

Despite the initial attacks of Hooker, Serbia came back with solid blocks by Veljkovic to take an 8-7 lead. The Americans recovered with consecutive attacks of Jordan Larson and Lindsay Berg and arrived to the second pause 16-12 with a pair of booming spikes by Hooker.  Serbia cut the lead to 20-18 with three attacks delivered by Milena Rasic but Akinradewo responded with two blocks to restore the calm and USA took the set 25-20.

Hooker’s exploits gave the Americans a jump-start in the third set as they grabbed an 8-1 lead. Serbia came alive with some good spikes by Mihajlovic but USA stayed in front with a comfortable margin of 16-7. Mihajlovic continued to hit steadily for Serbia but Akinradewo and Hooker took care the rest of the way and USA cruised to a 25-16 win.