The FIVB Volleyball World League 2016 Group 1 is set to begin! WorldofVolley is presenting 12 teams that will compete in Group 1. 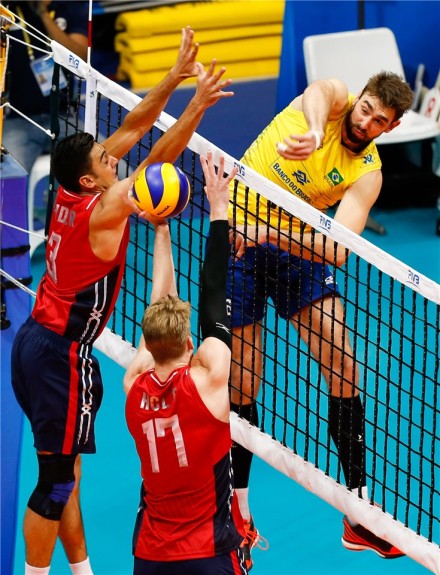 Argentina, Brazil, Iran and USA will start their FIVB Volleyball World League 2016 campaign in Pool B, that will be held in Rio de Janeiro, Brazil.

Argentina and their coach Julio Velasco want to reach the highest position in FIVB World League 2016. In the last edition of this competition they finished 11th and just year before, they were on the second place in Pool D to finish fifth in Group 2 and 13th overall. Now, Argentina is ranked No. 6 in the world. The team’s best achievements are the bronze medal at the 1982 World Championship, the bronze medal at the 1988 Summer Olympics and two gold medals at the 1995 and 2015 Pan American Games. In recent years, though without achieving any medal, the team finished 4th at the 2000 and 5th at the 2004 and 2012 Olympic Games.

Take a look at the 2016 roster of ARGENTINA.

Brazil has the most trophies in World League. They won nine gold medals and the last one was 2010! Rezende led the team to the 2001 World League title in his first outing and Brazil claimed the competition in successive years from 2003 to 2007. Next year USA broke their series and in the next two years 2009 and 2010 they were on the top, again.Brazil has two gold medals at the Olympic Games, won three times the World Championship and #1 team on the FIVB World Rankings. Is it time that Brazil win gold again?

Iran are on the rise and they are still proving their quality to the world. The biggest success in World League was the fourth place 2014 in Florence when they lost from Italian hosts in the match for the bronze medal. They are currently the strongest team in Asia, having won the 2011 and 2013 Asian Volleyball Championships, and rank 8th in the FIVB World Rankings.For the first time in history they have qualified to Olympic Games in Rio. 2014 they participated in World Championship in Poland and took 6th place.

USA are entering a fourth season under head coach John Speraw. They were not able to defend their crown and settled for bronze at the 2015 edition of the FIVB Volleyball World League, but they bounced back to take the title at the 2015 FIVB Volleyball Men’s World Cup, where they also qualified for the Rio 2016 Olympic Games. In 2014, they defeated arch-rivals Brazil in the World League final in Florence, the second time they have topped the podium at the tournament. However, it was a different story at the 2014 FIVB Volleyball Men’s World Championship where they missed out on the third round by two points and were ranked joint-seventh overall. In 2013 the US team took the gold medal in the NORCECA Championship, finished 12th in the World League and fifth in the FIVB World Grand Champions Cup. The USS, ranked No.5 in the world.

PRELIMINARY ROUND / GROUP 1 / POOL B