It is time to choose the best player of the FIVB Volleyball World League 2016, Week 2. We have shortened the list to 5 players, while it is up to you to decide which one will pick up the prestigious MVP recognition. 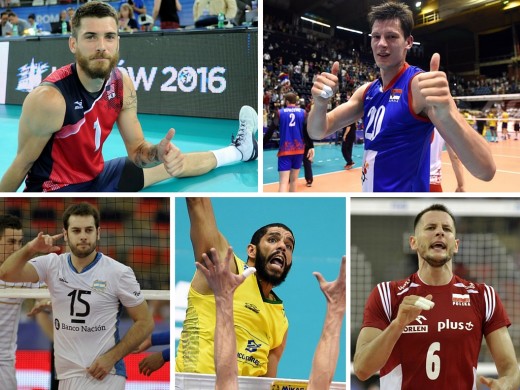 Please visit our POLL PAGE and vote for the player that you think was the best during the past FIVB World League week. Of course, you can vote below in the comments and over our Social Networks…

Check out who was the MVP of Week 1!

Srećko Lisinac. The Serbian middle blocker had an amazing performance against Brazil at the opening of the 2nd Week. He was destroying the defense of Brazil from the position 3 and from the service line. Serbian team has scored 20 aces during the game and Lisinac, believe it or not, has recorded 7! Also, he was the top scorer of the game with 18 points. In other two games, he had a solid role, enough to be included in the list of these 5 players.

Luciano de Cecco. This guy had an incredible week. The Argentine setter led his team to score two wins in a very tough group in Lodz! They lost the first match against the host Poland, but in another  two, they downed World League reigning champions France and Olympic champions Russia! But, we have to mention that the first match against the World Champions was the best so far in World League. In four sets, both sides scored 231 points in total. Luciano was the brain of the team and he provided comfortable spikes for his teammates…

Wallace de Souza. There is no need to speak too much about this guy. He was the engine of Brazil in Belgrade, as they scored two important wins.

Bartosz Kurek. Even thought Polan achieved only one win at the home court, we had to put his name among these five starts. He simply was on high level, scoring more than 20 points in every game.

Matt Anderson. Volleyball superstar was in the spotlight in the first two wins. He caused a lot of troubles to the rivals and in the third he played with the low intesity allowing his teammates to get more space in the attack. USA beat all the rivals in previous week and Matt gave a huge contribution!

WL 2016: What happened to Ngapeth? Monster spike by Frenchman (VIDEO)

FIN M: Serbian opposite in Lakkapää