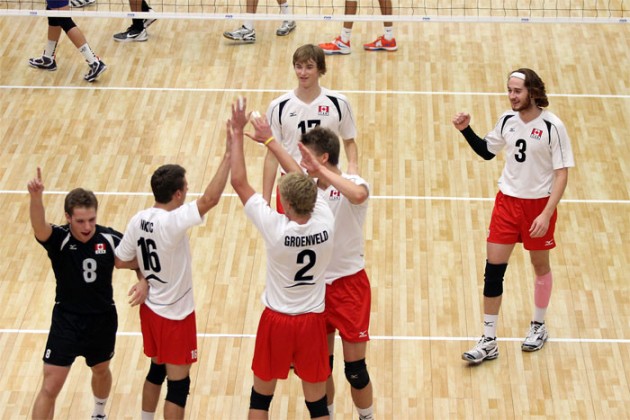 By winning the pool, Canada (3-0) advances directly to Friday’s semifinal round and Puerto Rico (2-1) will challenge Pool A’s third-place team in a quarterfinal match on Thursday.

Canada’s offense was distributed evenly with four players in double-figure scoring and six players with at least seven points. Dany Demyanenko led the way with 16 points and Jarrid Michael Ireland added 15 points in the victory.

Canada’s net defense produced a 16-5 block margin and limited its errors to 17 in the match to Puerto Rico’s 26. Canada also held a 57-44 attack point advantage.

“We knew coming into the match it would be a battle with Puerto Rico,” Canada captain Milan Nikic said. “They are a strong team and gave us the battle we expected. Our blocking was good, we were discipline in not reaching. The tournament doesn’t get any easier, and the job is not done.”

“I thought Puerto Rico was outstanding and disciplined in the match,” Canada head coach David Preston said. “They got us off balance.“

“I agree with the (Puerto Rico) captain that Puerto Rico will get better, but so will we. After our No. 2 (Daniel James Groenveld) went down with an injury, I am proud how our team reacted and filled in.”

“Congratulations to Canada,” Puerto Rico head coach Ramon Hernandez said. “It is not easy to lose a third set like tonight and come back the way they did and win. That speaks well of their team. They did serve and blocking well. For my team, we had troubles passing and hitting tonight and that is something will want to improve upon. But overall, I am happy how my team is playing. We will regroup and be ready for Honduras tomorrow and play better to reach the semifinals.”

“My hats off to Canada for their consistent play,” Puerto Rico captain Cristian Rivera said. “They had did well blocking and serving, which are trademarks of their program. We can improve on our reception, and we showed that in the third set. We are looking forward to the rest of the tournament.”