Guadeloupe captain Isabelle Acina and Sylvia Sidney combined for 25 points to inspire a four-set win over Bahamas which secured a spot in the gold medal match against Trinidad & Tobago in the 2014 FIVB World Volleyball Women's Norceca First Round Group A in Paramaribo, Suriname, on Sunday. 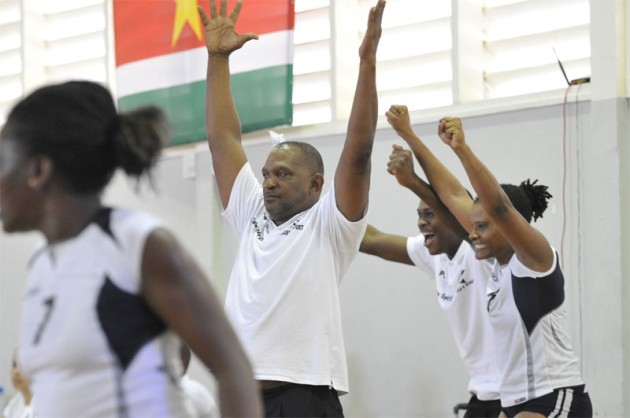 Going into the match, Guadeloupe had a 1-1 record and needed a win to be certain of qualification for the final ahead of host Suriname (1-1), which played Trinidad & Tobago in its final match afterwards and needing a win also.

Vanessa Azille and Meliza Bernard-Fayolle added nine points each for Guadeloupe which dominated the match after its slow start, dominating its opponent on spikes, 31-23; blocks 13-8 and service aces 5-4.

For Bahamas, Melinda Bastian had a team-high 10 points while Tia Charlow added nine and Cheryse Bain, seven, in the loss which set up a battle with host Suriname for the third and final qualification spot to the second round of the world qualifiers.

Speaking after the important victory, an elated Acina said: “The team had a few problems in the first set with its concentration after which we settled and played a better game in terms of movement and passing. Our destiny to get to the finals was in our hands and we came out and executed and for us to play in a final at this level it is an honour.“

Bahamas captain Krystel Rolle said her team’s concentration level for the match was not where it was supposed to be.

“We needed to have a better game in our service reception and setting than we did today while we also committed a lot of errors”, Rolle said. “Nevertheless we still have a chance to finish third and qualify for the next round we will be hoping to finish the tournament on a high against whichever team we play for the bronze medal.”

Jean-Louis Delag, coach of the victorious Guadeloupe team said he was very happy for his team to reach the final while he also commended Bahamas for putting up a great fight despite their team being short on numbers.

A disappointed Joe Smith, coach of the Bahamas congratulated Guadeloupe on its win saying that most teams in the region can take a page out of their books for their fighting spirit.

“Guadeloupe is a very scrappy team in that they fight for every ball while on the other hand we faltered defensively and played in patches.”

“Tonight if we can somehow repeat our performance we had against Trinidad & Tobago in our opening match we will have a chance but it is not going to be easy because we may be short on a key player for that match due to injury.”

ARG: World Challenge to be played in Argentina