It was another outstanding weekend of World League 2013 qualification action with plenty of cheers and tears shed as the Netherlands beat Portugal in two five-set thrillers to book a spot in next year’s edition of the premier annual men’s tournament while Iran were convincing winners against Egypt to advance to a play-off with Japan for the second World League vacancy. 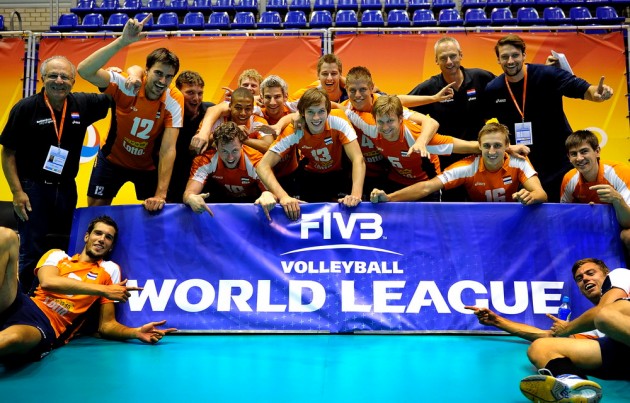 Prior to the playoff, it was hard to pick who would win it. Playing at home and looking to build on their storied history in international volleyball, the Dutch, ranked 41st in the world, were hoping to return to the World League for the first time since 2010 and for the 17th time out 23 editions. Meanwhile, Portugal, ranked 38th in the world, were out to defend their World League spot which they had held over the past two years. Their 16th place finish in 2012 meant they had to enter the playoff system and would have fancied their chances considering they beat the Netherlands 3-0 (25-20, 25-22, 25-18) in 2010 in pool play of the 2011 European Championships. However, at FIVB level, Portugal, who had played a total of nine times in the FIVB World League, had yet to take a set from the Netherlands and although they definitely broke that duck, they were beaten in end probably by the Dutch crowd, it was that close.
Meanwhile, Iran were also celebrating after overcoming the tough assignment of beating Egypt in Cairo. Like the Netherlands and Portugal, it was the first time either team had played on home soil however that didn’t seem to favour Egypt as Iran won the two-match playoff in impressive style.

Shahram Mahmoudi was the star for Iran leading all scorers across both matches with 17 and 19 points respectively. It bodes well for Julio Velasco’s men who must now play Japan, who finished 15th in the 2012 World League, in Tehran in a weeks’ time to see who will finalise the final vacancy for next edition.