Determined Korea, the third place at the last year’s Asian meet in Tehran, Iran, played Vietnam with a high hope of regaining their pride lost in the quarter-finals. 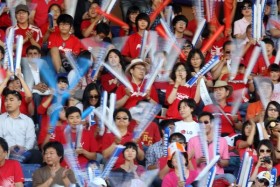 There, the Koreans failed their mission on making the cut for the semi-finals following the disappointing 2-3 loss to India. In the 5th-6th playoff on Friday, the Koreans pulled off a scintillating 25-22 25-18 25-19 victory over the host side.

Against the fast-improving Vietnam, the team they had beaten in closely-contested three sets in the pool preliminaries, Korea fielded substitutions including Sim Kyoung-Sub and Park Jin-Woo to give them a chance to obtain international experience and exposure.

The Koreans opened up an attack game, with terrific Song Myung-Geun exploding thundering back-row spikes in an effort of foiling the rivals’ blocking abilities. Vietnam put on a brave fightback to challenge the speedy visitors seriously. Still, Korea had enough left in the tank to hold them off. The first set was won by the Koreans 25-22.

In the error-filled second set, while Vietnam were leading 8-7, the Control Committee members on duty found the position fault in the Vietnamese side. As a result, the hosts suffered the points deduction and had to restart from trailing 0-8 instead. As expected, Korea took the second set 25-18.

Vietnam still faced the similar fate in the third set. When both sides were tied at 1-1, it was found again that the host team had a position fault and had to suffer the points deduction. Korea led 2-0 and stretched it to 12-7, thanks to the excellent offensive combination between Song Myung-Geun’s non-stop onslaughts.

Holding a 22-17 lead, Korea advanced 24-18. They allowed the host team only one more point before Son Hyun-Jong produced a lightning mid-court spike to win the set 25-19 and the encounter.

Song Myung-Geun scored the highest 18 points for Korea, while Bui Van Hai led Vietnam with13 points, all of them from deadly attacks.

With the victory, Korea finished fifth overall, while hosts Vietnam came in sixth place in this tournament.