The FIVB world No.19 and the Guangzhou Asian Games winners Japan returned with great despair following the eighth-place finish from the previous edition two years ago. This time, they set a higher target in Vinh Phuc – to stand in the top-three podium. Their dreams were eventually fulfilled on Friday. 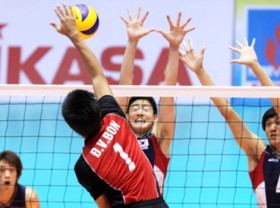 In the third-place playoff against India, things initially turned sour for the Japanese side when they lost their touch to go down 16-25 in the first set.

Japan, powered by ace spiker Takashi Dekita, jumped to a 16-9 lead in the second set. As India became more prone with attacking and service errors, Japan seized the chance to attack relentlessly.

India tried to pull their game together, with smashing machine Gurinder Singh attacking powerfully from the mid-court.

However, their attempts were in vain when Japan remained in top form, overpowering the taller blockers with fast spikes at the post. Japan took the set 25-18.

The Japanese still controlled the game marvelously well in the third and fourth sets. They put on a brilliant form to spike, block and serve to foil the rivals’ counter-attacking efforts. After a long rally, Japan were on cloud nine when they won 25-20-25-21 to eventually beat India 3-1 for the third place.

Takashi Dekita led Japan with 23 points, 20 of them from explosive kills, while Gurinder Singh bagged the highest 15 points for India.