The home guys of the Czech Republic booked their spot for the final round of the 2013 European Championship on Saturday after they stretched their winning streak to five consecutive matches by cruising past the Former Y.R. of Macedonia in straight sets (25-20, 25-15, and 25-14). 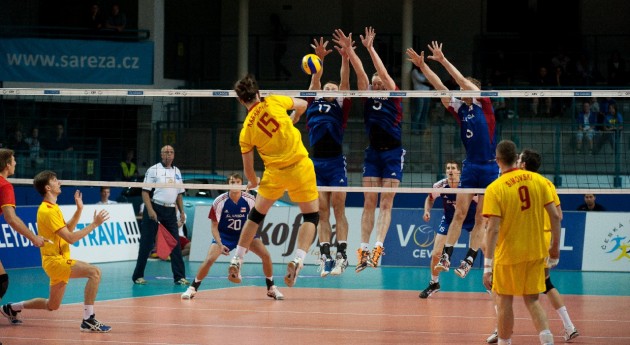 After a relatively slow start, the Czech team around head coach Stewart Bernard cruised to an 8:4 lead in the first set moving then up to 14:7; the set was eventually cashed at 25-20 with the precious help of local favorite David Konecny that was enthusiastically cheered by the crowd.

The Czech Republic went up 16:9 in set 2 and a speedy 25-15 was quickly pocketed by the Czechs. Jakub Janouch got some playing time in set 3 and the Czechs cruised to a massive 13:2 after the game was joined also by Karl Linz and Vladimir Sobotka. The fans paid back their heroes with a standing ovation as they sealed the final 25-13 that means their qualification for next year’s European Championship.

“I am very proud of my team and they deserved this European ticket because they have been working really hard” said Bernard. “We slowed down a bit in the end of the first set but we had the game under control. My guys today showed that they know how to play Volleyball”.

“We are very pleased with our qualification and today’s match was some kind of a special present to all our fans. We were drawn to a relatively easy group but this comes from our good past results. I hope we can testify our positive development also at the European Champs” said Czech captain Ondrej Hudecek.

EC M: Austria and Croatia to fight for second place