EC M: Austria and Croatia to fight for second place

Croatia surprisingly lost to Austria and that leaves the door open for the third and last qualification round to the players mentored by Michael Warm. 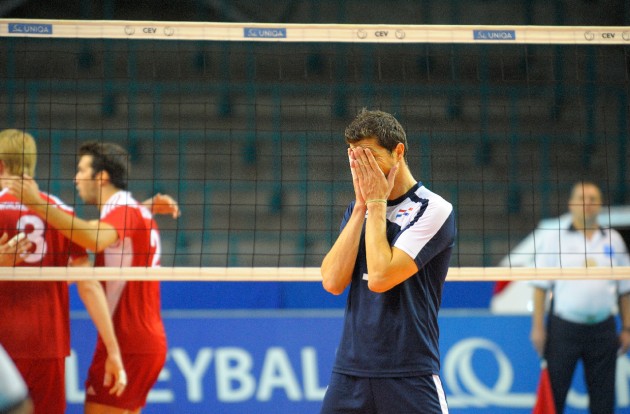 Quite surprisingly Croatia lost earlier in the afternoon to Austria 1:3 (19-25, 17-25, 29-27, 21-25) and after yesterday’s defeat to Macedonia, things get really complicated for the side around superstar Igor Omrcen.

Austria showed some great fighting spirit to win the first set and did so also in the second, before missing two match balls in set 3 where Omrcen eventually took his side by the hand up to the final 29-27. Still that was all for Croatia as Austria did not miss their chance and with this win the players in red and white jerseys are still in contention for the second place in the standings of the group.

Thomas Zass paced Austria with a massive haul of 26 points.

“It was our last chance and we could deliver a top performance. I would like to thank my teammates because even after losing the third set, they did not stop fighting” said a happy Austrian captain Daniel Gavan.

“There is not much to say, it was a superb performance of my team” added head coach Michael Warm.

“In comparison with yesterday, my players showed the right attitude and more composure but this was not enough to beat Austria” stated Croatia’s mentor Igor Simuncic. “After winning the third set I wanted to see my players fight with more energy but they rather looked tired. Five games in only nine days is quite demanding for such a young team”.