Lausanne, Switzerland, January 4, 2012 – Cuba have moved into the top five of the FIVB Men’s World Ranking while the top six teams in the women’s edition remains unchanged after the FIVB updated the respective standings on Wednesday. 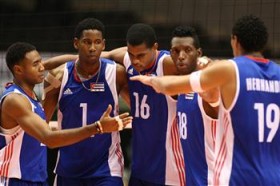 USA make way for Cuba in the men’s edition while Iran’s passionate display at the World Cup last year sees them leapfrog Germany into 11th. Elsewhere in the top 20, Japan move above Venezuela to 15th and Canada, Tunisia and Korea move into joint 18th and 20th respectively as France slip three places to 21st. The biggest winner in the updated rankings was Sri Lanka who bolted 13 spots to joint-91st.

Russia dropped one place to seventh in the women’s standings while the Dominican Republic move above Cuba into ninth to round out the top 10. Turkey fall one spot to 11th while Thailand and Korea both climb a place to 12th and 13th respectively. Poland and the Netherlands are the only other two changes in the top 20, the former dropping two places to 14th and the latter just one to 20th. Paraguay’s seventh place finish at the CSV Continental Cup sees them move 18 places up to joint-75th, the highest mover on the ranking