The 2013 Men’s North, Central American and Caribbean Volleyball Continental Championship will be played at the Langley Events Centre. 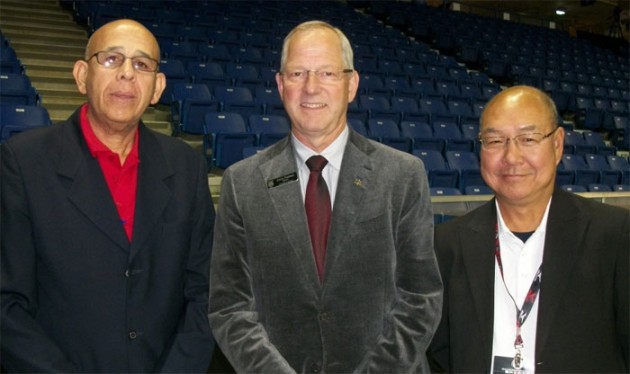 The announcement was given this saturday in a press conference with the presence of the Township of Langley Mayor, Jack Froese; Volleyball Canada President, Hugh Wong; the President of Volleyball British Columbia, Chris Densmore, and the Director of Business Development of  the Langley Events Centre, Jared Harman.

Members of the Norceca Control Committe also attended to the conference that took place at the same venue that is hosting Men’s U23 Pan American Cup.

On behalf of the NORCECA Volleyball Confederation, General Manager and Men’s U23 Pan American Cup Director of Competition, Nelson Ramirez, aknowledged the support of Langley’s local authorities and the local organising committee.

“We want to thank you all for all the support you have provided for the cup. This is a first level venue and complies with all the requirements for Norceca and FIVB level competitions,” said Ramirez.

Volleyball Canada President, Hugh Wong remarked the organizacional capacity of the local committee and the people of Langley for this next big volleyball event. “The Host Committee along with Volleyball BC, the venue staff, and numerous volunteers have been excellent. A lot of work goes into the organization and delivery of these events and we anticipate that given one year to plan and promote that next years NORCECA Men’s Championship will exceed expectations and we look forward to great crowds coming from throughout BC to cheer on our national team.”

The tournament will be played in september and will also be the first International volleyball event ever held in British Columbia with the participation of the national teams of  Canadá (18 in Men’s World Ranking), Cuba (6), Dominican Republic (45), Mexico (23), Puerto Rico (21), USA (5) and two or three other teams from Central America and the Caribbean region.

NORCECA M: Brazil to play for gold at Men’s U23 Pan Am Cup