The entity in the idea of its President, Juan Antonio Gutierrez and its Board of Administration supported the Brazilian Ary Graça, as best candidate to Preside the International Volleyball Federation (FIVB) due to the great job done by him heading the South American Volleyball Confederation and the chances of development that his victory could give to this continent Volleyball. 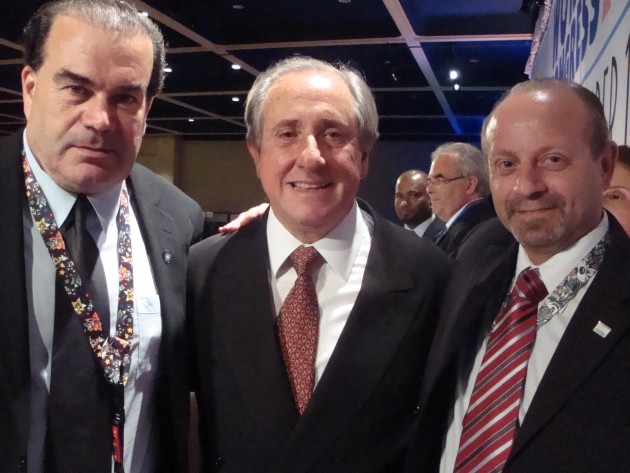 With this idea in mind, Juan Antonio Gutiérez and Gabriel Salvia (FeVA General Secretary) traveelled to California to the city of Anaheim, USA to the FIVB World Congress 2012, where the first democratic election to replace the outgoing Jizhong Wei, from China. “It was an historical fact that each federation could vote its candidate in a democratic and secret election” expressed first Gutierrez.

The Brazilian candidate overcame his rivals, the USA Doug Beal and the Australian Chris Schacht winning in the first round by over 50 per cent. Therefore, the leaership of the international entity returns to be in the hands of a Latin American President as Wei prior President, the Mexican Rubén Acosta.

After Friday’s and last day FIVB World Congress date at Anaheim, USA, the Brazilian Ary Graça, best and top vollebyall leader of Brazil became the first South American FIVB President. The prior presidents were: The French Paul Libaud (1947-1984), the Mexican Acosta (1984-2008) and the Chinese Wei (2008-2012).

“We are very happy for the decision we took as we hope it will be very positive for all the region volleyball. The newly President, thanked FeVA support and left very clear comments on the fact that without gathering all South America support it would have been very hard to win this election and we believe this is very real” pointed out Gutiérrez.

Graça reach the Prsidency with 103 votes while the rivals divided the rest of the votes with the American Doug Beal obtaining in second place 86 votes and the Australian, Chris Schacht with 15.

Gutiérrez confirms that the new FIVB President “got the engagement of developing even more together with Argentine officials our volleyball“. At the same time, the Brazilian fave value to the important work held in Argentina to develop the CSV Volleyball mentioning that “we have to work together to improve the growth of Volleyball all over South America“.

The outgoing President meanwhile, the Chinese Wei mentioned the good management of the last FeVA authorities, headed until December 2011 by the Architect Alejandro Bolgeri. He emphasized the work of all Argentine volleyball authorities that put Argentina from FeVA’s work at the World Volleyball again, after a hard and strong crisis suffered in the country and overcome in the year 2004 with the creation of the Argentine Volleyball Federation (FeVA).

Both officials, Graça and Wei, predicted a promising future for our sport and pointed out that they “see with good eyes the international future of Argentina at the most important FIVB World competitions“.