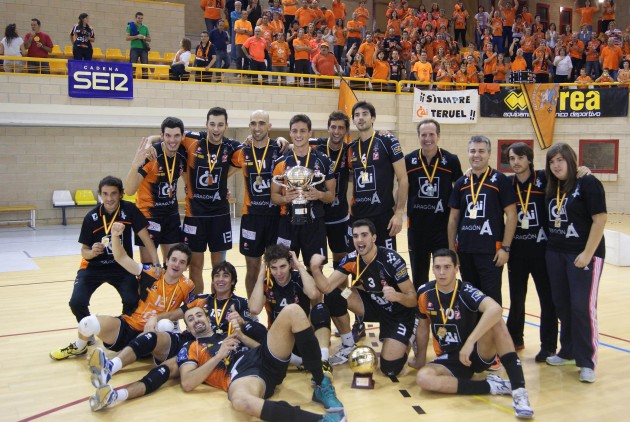 The team from Teruel proved its quality and searched the victory from the onset of the match; in a convincing demonstration of control of every situation, CAI TERUEL used the effective distribution by Miguel Ángel de Amo and the spikes by Juan Carlos Barcala to overcome an enthusiast local side. The points by Barcala and the contribution of Maximo Torcello helped CAI TERUEL achieve the required edge to close the first set 25-22.

The spirited spectators that had filled Los Pajaritos sports hall put the local team of CMA SORIA back on track in the second set. Nonetheless, CAI TERUEL was able to take the lead after the second technical time-out, through the exceptional performance of setter Miguel Angel de Amo. The experience and strength of the squad that will represent Spain in the 2013 CEV Volleyball Champions League gave wings to the group trained by Oscar Novillo in the end of the set, so the visiting players were able to seal the 25-23 in the second period that situated them one step away from the title.

Ciudad Medio Ambiente SORIA tried to stop the momentum of the visiting squad and used the support from the stands to impose good opposition in the third period. However, as the set progressed, the absence of errors and the solid blocking from CAI TERUEL paved the way to victory for the reigning League and Cup winners. The clear 25-15 in the third set meant the final 3:0 in the match and unleashed the euphoria in the Aragonese squad, which achieved the third consecutive title in Spanish domestic competitions.

The crown for CAI TERUEL in the Supercopa 2012 prolongs the era of domination for the orange squad and represents the official kick-off of the domestic season in Spain.

TUR M: Ivan Miljkovic still got the fun of playing