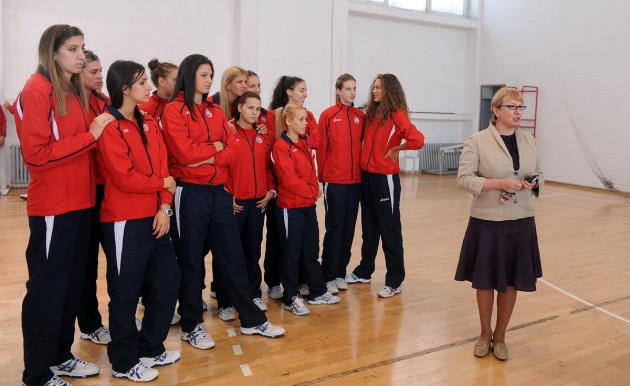 The girls in red and white jerseys will try to extend their dominance in domestic competitions and celebrate also their third appearance in Europe’s most elitist event.

The young members of the team were recently introduced to the Serbian media. The Secretary General of the club, Ana Avramovic, announced the goals for the 2013 campaign: “We would like represent our country and our town in the best way as we compete with the European elite, but the first goal of this young team is to make it to the last stage of our domestic competitions”.

Head coach Ratko Pavlicevic has set very ambitious plans for a roster that this year is very young and inexperienced. Because of that, the team started its preparation for the coming season already two months ago. The group has participated in some international tournaments and played very solid opponents. “I believe that the team can perform pretty well in this competition. We are quite young and that means that we can take some valuable experience from this adventure. I hope we will leave a positive impression after the competition ends” says the head coach.

This past June in Vienna, during the traditional European Volleyball Gala, Crvena Zvezda BEOGRAD was drawn in Pool F along with Russia’s Dinamo MOSCOW, Poland’s Bank BPS Fakro MUSZYNA and Lokomotiv BAKU of Azerbaijan. This is, according to the words of Pavlicevic, a very strong Pool.

Team captain Ana Bjelica says: “The goal is to win some sets and more points than we did last year, and we will also try to claim our first win in the Champions League. Our rivals are very strong, but I hope that our team will justify its right to participate in this elitist competition”.

The roster of the Serbian champion suffered some changes, the most experienced players have gone and they were replaced by some talented juniors, with the addition of Julia Milovits, the setter of Hungary’s national team.