Azerbaijan’s national champion Rabita BAKU try to retain its title in the FIVB Club World Championships, after that they start into the 2013 CEV Volleyball Champions League. Read latest volleyball news on Worldofvolley.com. 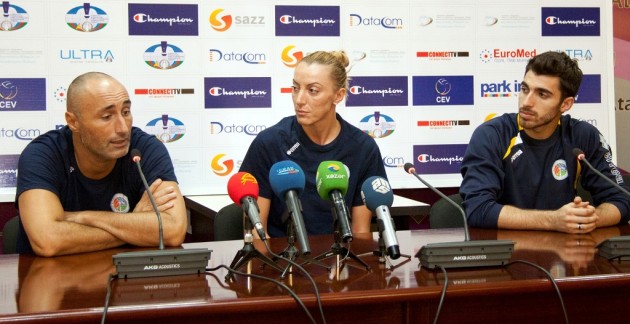 That campaign will start with the match against Sollys/Nestlé OSASCO (BRA), a team whose roster stars five Olympic champions from London 2012 and that is participating in the event for the third year in a row. Next will be the game against China’s Bohai Bank, Asia’s club champion.

The roster of Rabita has undergone some changes since last year as the club has signed Colombian Madelaynne Montano, the world’s most prolific player with 54 points in one match and 65% of efficiency, plus US American middle blocker Foluke Akinradewo – MVP of the 2011 FIVB World Grand Prix, Germany’s Angelina Hübner–Grün, Puerto Rican Aurea Cruz, Poland’s setter Katarzyna Skorupa and some more players. Marcello Abbondanza – who is seen as a potential candidate for leading Italy’s national team for the next Olympic cycle – is Rabita’s head coach for the 2012/2013 season.

Right before traveling to Doha, Rabita organized in Baku a press conference to present its campaign in the 2013 CEV Volleyball Champions League that was attended by the head coach as well as by team captain Mira Golubovic.

“We have a very long way to go but I have 13 great players that will be helping me along this way” said Abbondanza. “I believe in our group and even though we need some time to find the right and necessary chemistry, we’ll get better and better”.

“I truly feel honored for being the captain of such a great team” added Golubovic. “We have a lot of great players and everyone may take up this role. This is a huge responsibility but I will do my best to support the team at any time”.
Rabita will open its campaign by playing Agel PROSTEJOV in the Czech Republic before hosting the first home match on November 1 as Italy’s AsystelCarnaghi VILLACORTESE will travel to Baku.