Sollys Nestle of Brazil won against Bohai Bank of China 3:0 in Pool A of the Women’s FIVB Club World Championship at Aspire Zone Hall in Doha. Sheilla Castro, Jaqueline Carvalho, Thaisa Menezes and Fernanda Rodrigues were the best in Sollys. Yin Na and Chen Liyi in Bohai Bank. 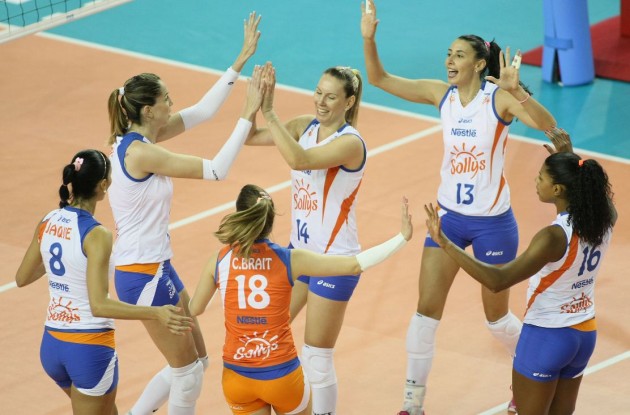 The South American representative out blocked their opponents 9-0 and had a 2-1 edge in the blocking stats.

Sheilla Castro led the winners with 17 points, including three blocks while Jaqueline Carvalho added two blocks and one ace among her 12 points. Thaisa Menezes and Fernanda Rodrigues contributed 12 and 11 points to the winning effort.

Yin Na and Chen Liyi were the only Chinese players who finished with double figures in the scoring charts with 14 and 12 respectively.

In the opening set, Sollys Nestle was in front 5-2 when Bohai Bank called a time-out. Menezes’ block and two attacks down the middle gave the Brazilians an 8-2 lead. The difference expanded to 12-4 following several attacking errors from the Chinese side. Chen Liyi scored with an ace and Yi Na hit one off the Brazilian block for 14-6. Setter Fabiola landed a one with a disguise play. Yi Na scored again and Sollys called for a time out at 14-9. Fernanda was good with a tip and followed with a block for a 16-9 score at the second pause. When play resumed Menezes scored with a running spike and Fernanda landed a terrific cross court spike. Sheila continued with two more spikes forcing another time-out at 20-10. Castro planted one cross court attack from the right for set-point and Adenizia closed the first set from the middle for a 25-13 score.

Menezes started the second set with two good kills while Yin Na scored for Bohai. Sheilla gave Sollys a 4-1 lead and followed with a solid block. At 7-3 Chen Liyi hit a big one off the Brazilian block but Jaqueline responded with a laser shot for an 8-4 difference. Yin Na continued with a good attack but Fernanda answered back. Setter Wei Qiuyue scored with a smart disguise play and Jaqueline hit a bomb from the back court. Sheilla landed a tip over the opponent’s block and followed with a right hander spike. Menezes served long but Sheilla made up with her ninth spike and eleventh point for a 16-9 score at the second technical time-out. When Sheilla scored off the block for a 19-10 score, Bohai Bank called for time-out. Zhang scored from the right side but Adenizia imitated her. Sollys Nestle won the set 25-14.

Chen Liyi helped Bohai Bank for a 4-2 lead in the third. Jaqueline followed with two spikes for a tie at 4-all. Chen scored with two more kills. Li Juan netted her serve as also did Sheilla. Yin Na landed a spike for an 8-5 lead in favor of the Asian team. Jaqueline and Fernanda closed Sollys within one point and the South America side equalized after an error. The score continued evened with both teams trading kills and some unforced errors. Chen Liyi landed one for 15-14 and Bohai got a two-point lead at 16-14 after a Brazilian error. Yin Na increased to a three-point lead and Sollys Nestle called for a time-out. Jaqueline scored and served an ace to reduce the distance to one point. When Wang Ning’s attack hit the antenna we had an equalized score. Gabriela Souza served one ace and Menezes hit a hard spike for a two-point lead. Then Sheilla blocked Yin Na to increase the advantage to 22-19. Menezes scored for match-point at 24-19. Fernanda hit one just out of bounds but Menezes closed it at 25-20.

CYP: The men and women of Cyprus...